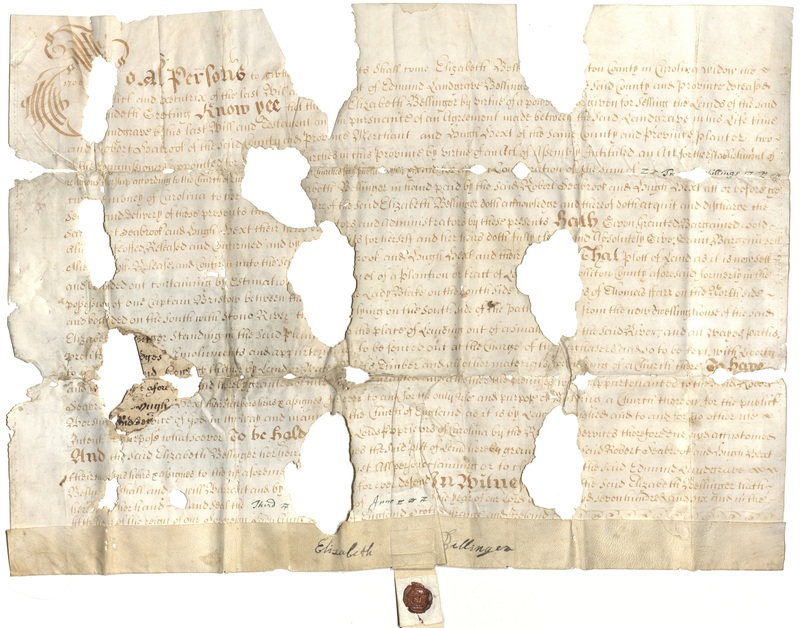 Letter of conveyance for land to the Church of England, courtesy of the South Carolina Historical Society. The 1706 Church Act required land to be given to the Church of England from each parish. Given by the Estate of Edward Bellinger by his wife Elizabeth, the letter of conveyance provided a 39-acre plot to build St. Paul’s Parish Church and establish a glebe for its maintenance. 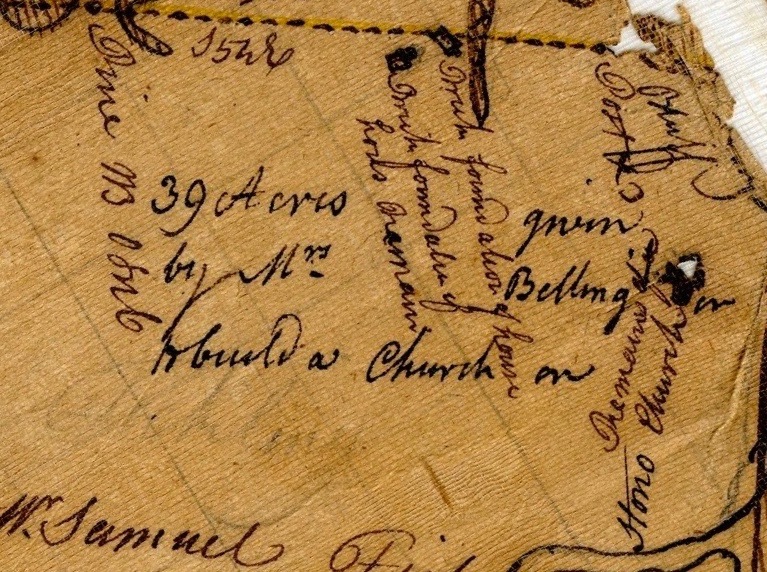 Detail of plat of Stono River land, circa 1807, courtesy of South Carolina Historical Society. This circa 1807 plat notes the original "39-acres given by Mrs. Bellinger to build a church on."

The 1706 Church Act provided public funds for the construction of parish churches throughout the colony. The same year Landgrave Edmund Bellinger donated a small piece of land on the west bank of the Stono River for the construction of St. Paul’s Parish Church. Over the next two decades, the vestrymen of St. Paul’s Parish acquired nearly 500 acres to expand the church glebe. Today much of that land is located beyond the northern boundary of Stono Preserve. These glebe lands – lands owned by the parish and cultivated by enslaved laborers - supported the parish and its minister. Construction of St. Paul’s Parish Church, one of the first Anglican churches in the colony after the passage of the Church Act, began in April 1707. While parish church supervisors—Robert Seabrook, Hugh Hicks, and Thomas Farr—oversaw the church design, enslaved Africans, enslaved Indigenous people, indentured servants, or a combination of these groups provided the labor for the construction of the church and its nearby parsonage. When the church was finished, it significantly altered the landscape with its imposing presence on the west bank of the Stono River on relatively high ground—twenty-five feet above mean sea level – which made it visible from both the river and its opposite bank on what is today John’s Island. Today, the former churchyard is less imposing, sitting in a ¼-acre clearing. Two low earthen mounds mark the foundational ruins of the church, with the parsonage ruins nearby.

While no images of the first St. Paul’s Parish Church are known to exist, several references in historic documents help establish its character and use. A 1715 letter written by the St. Paul’s Parish vestrymen described it as a “Small but convenient Brick Church in length 35 in breadth 25 feet,” and a 1722 letter written by St. Paul’s Reverend William Bull noted that construction had begun on an addition because parishioners were “…generally very much Crowded in their Seats, & at times for want of room some are forced to stand out at the doors & windows.” A description of the addition does not exist, though in 1732 Reverend Bull wrote that the enlarged church held 200 parishioners. 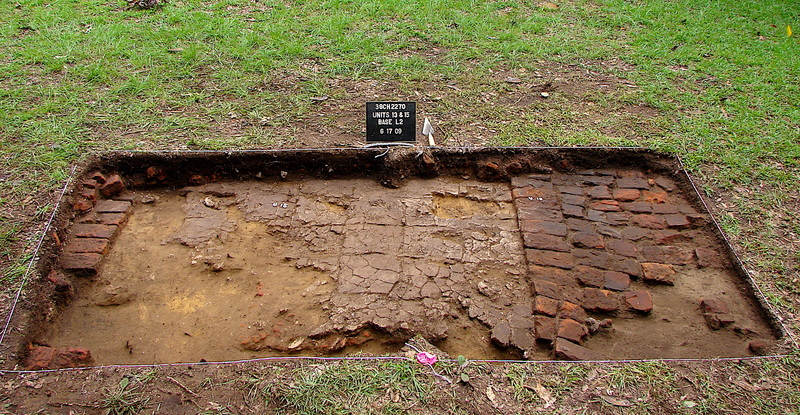 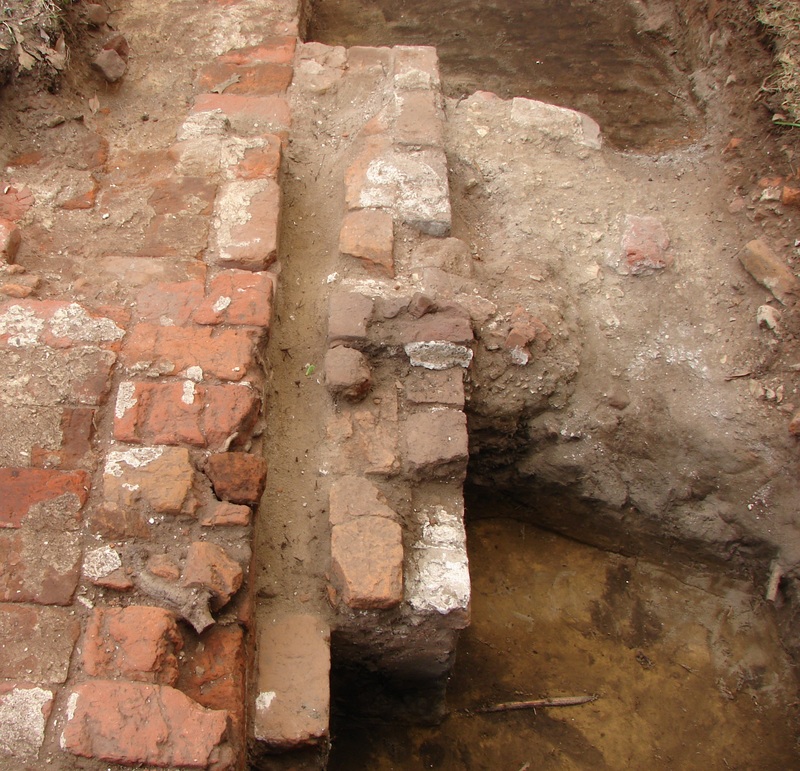 With limited historical documentation and no above ground remains, archaeological research provides the primary data used to construct a description of the church. The research began in 2009 with test excavations on the larger of the two mounds and a geophysical survey of the churchyard to look for subsurface features using ground penetrating radar (GPR). These initial steps verified that the mounds did indeed cover the ruins of the early-eighteenth century church foundations. GPR data confirmed the two construction phases described in the early eighteenth-century letters. It showed the original thirty-five by twenty-five-foot rectangular church and the 1720s addition that transformed the rectangular church into a cruciform. Archaeological excavations between 2009 and 2011 were used to “ground-truth” the geophysical survey, providing material evidence of the church construction. Ultimately, three sources of information—archaeological excavations, extant churches of a similar time period and region, and historical documents—allowed archaeologists to create a description of St. Paul’s Parish Church. 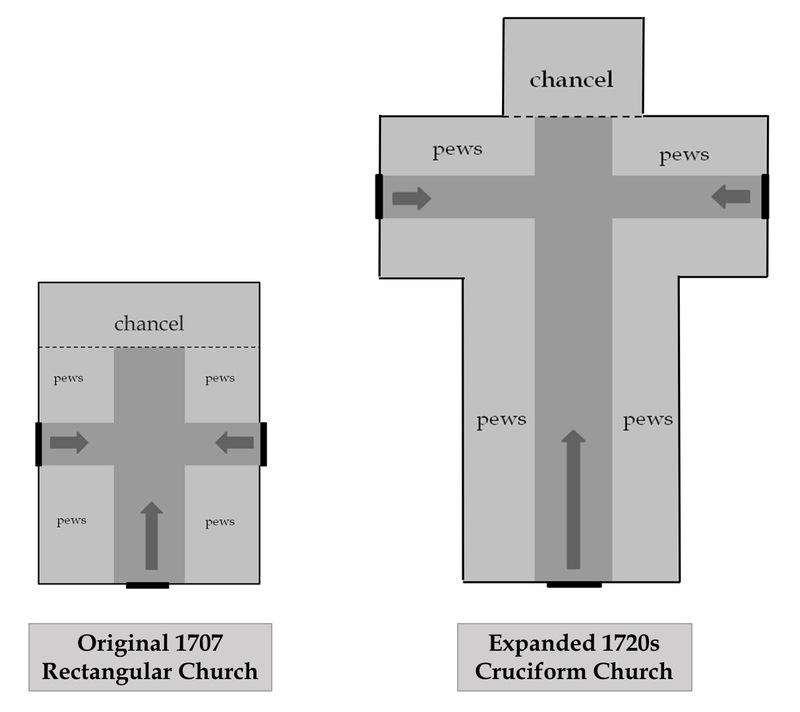 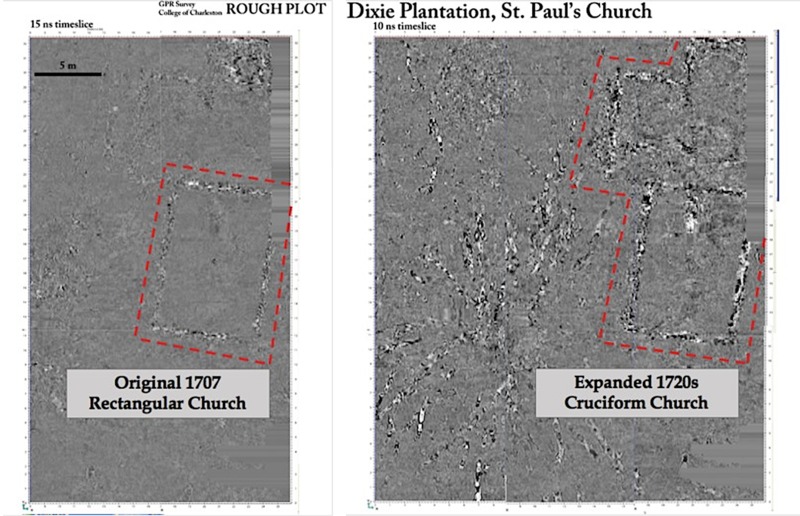 A simple church in a newly settled region of the colony, it was geographically located in the center of the parish, built on high ground for protection from tidal waters. It was later enlarged to accommodate a growing colonial population. St. Paul’s Parish Church was one-story and built of brick, likely with a wooden roof. Glazed bricks probably accented corners, windows, and doorways, highlighting those architectural features. It is doubtful the church had a steeple or bell tower, as neither feature was typical of the early-eighteenth century. Sunlight entered through the clear glass windows that lined the east and west walls and reflected off the white plaster walls.

In 1707 the church was rectangular with two doorways. One was centered along the south wall and the other along the east wall, facing the Stono River. A seven-foot wide center aisle constructed of square brick pavers ran the length of the church and led to the chancel where the altar was located. A single row of bricks separated the central aisle from smaller brick pavers that covered the rest of the church floor. These smaller brick pavers were intentionally broken in half and placed directly into a prepared sandy soil without mortar to secure them. Given the rustic unfinished nature of the floor and the relatively large number of nails discovered in the soil immediately above, it is probable that parishioners sat in raised, wooden pew boxes built above the floor typical of the period. Both the exterior and interior of the 1707 church probably looked similar to Strawberry Chapel (ca. 1725) in St. John’s, Berkeley Parish. 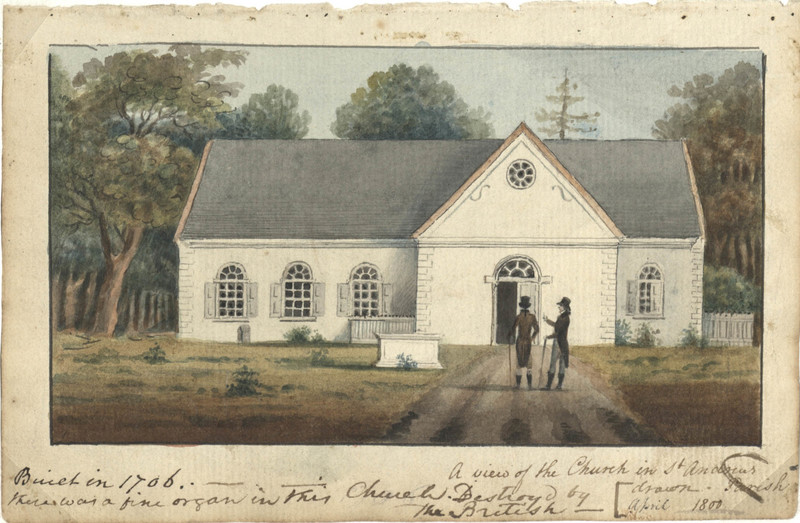 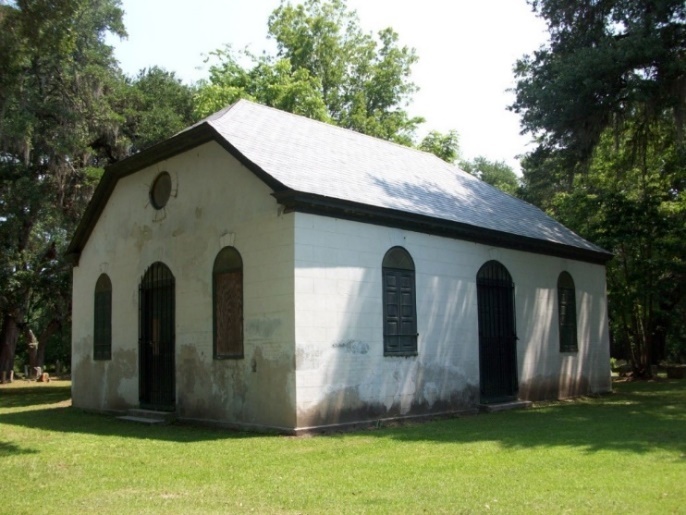 (Above) Strawberry Chapel, photograph by Kimberly Pyszka, Moncks Corner, 2011. (Below) St. Andrew's Episcopal Church, South Carolina, 1940, courtesy of Library of Congress. Strawberry Chapel is a rectangular church similar in architecture to St. Paul’s Parish Church in 1707. St. Andrew’s Church is an example of a cruciform church renovated the same year as St. Paul’s Parish Church. St. Andrew's Church is also depicted in the watercolor above. 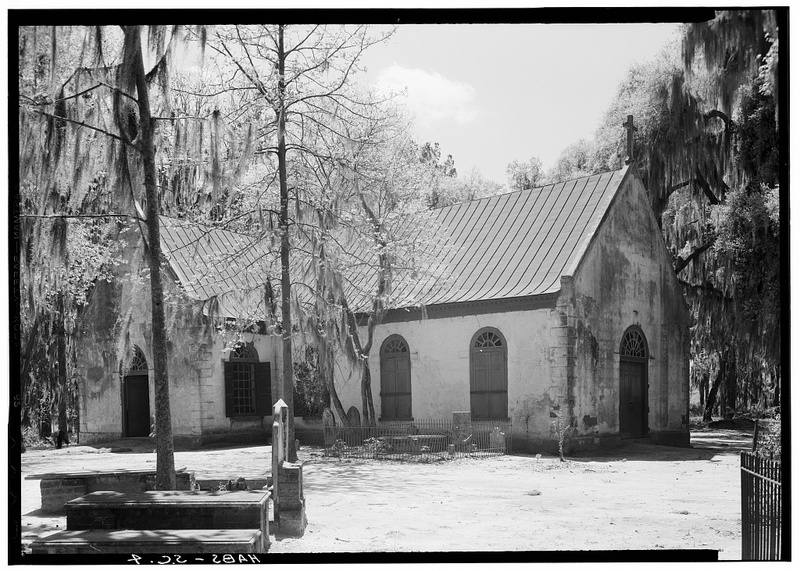 After the 1720s addition and renovation, typical of cruciform churches, entrances were relocated at either end of each transept of the cross. The south entrance was widened and probably served as the main entrance. The central aisle now extended through the new addition terminating at a “step” up to the new chancel. A wooden railing likely ran along this “step,” creating a place for parishioners to kneel during communion, echoing a design element seen at Strawberry Chapel. A secondary aisle led parishioners from the transept entrances to the main aisle. After the 1720s addition, the church likely had a similar appearance to St. Andrew’s Parish Church that survives today.

With the division of the parish in 1734, a chapel of ease opened in the northern portion of the parish and many parishioners began attending services at it instead of traveling a greater distance to St. Paul’s Parish Church.  In 1742, parish officials and parishioners petitioned to have the chapel declared the parish church. When this became official is unknown. However, in 1756 the original parish church along the Stono River was razed and the materials were used for repairs at the new parish church, formerly the chapel of ease thus again radically altering this landscape.