The Landscape of Agriculture 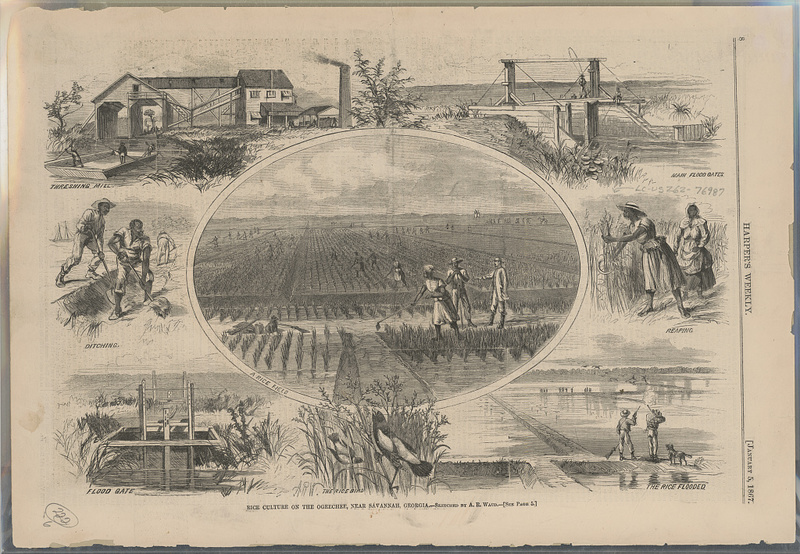 "Rice culture on the Ogeechee," Georgia, illustration by A. R. Waud, Harper & Brother, New York, 1867, courtesy of Library of Congress. Rice was the major cash crop in the South Carolina and Georgia Lowcountry until the beginning of the 1800s when many plantation owners switched to cotton. 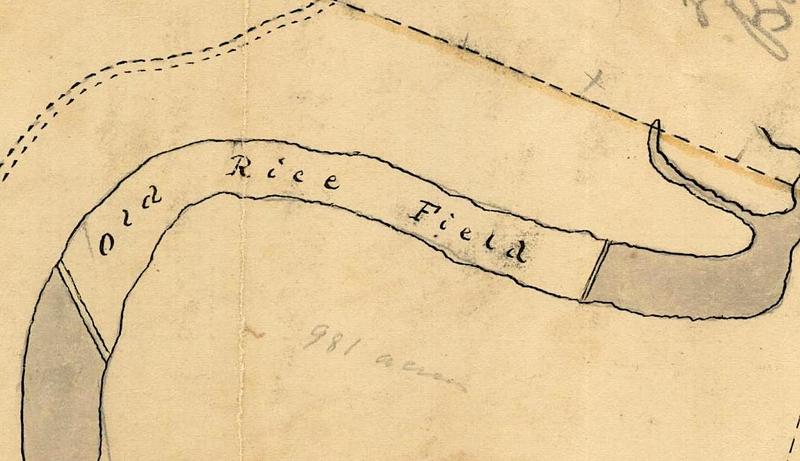 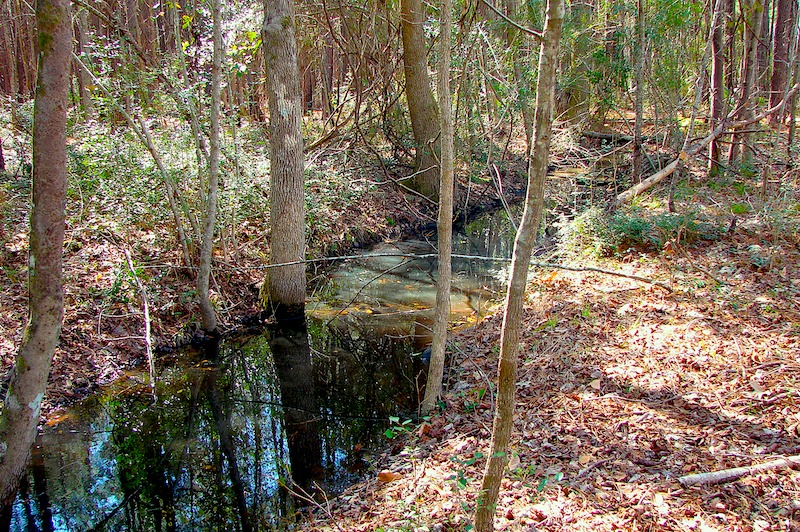 One of the extant abandoned rice canals, photograph by Kimberly Pyszka, Stono Preserve, 2007. 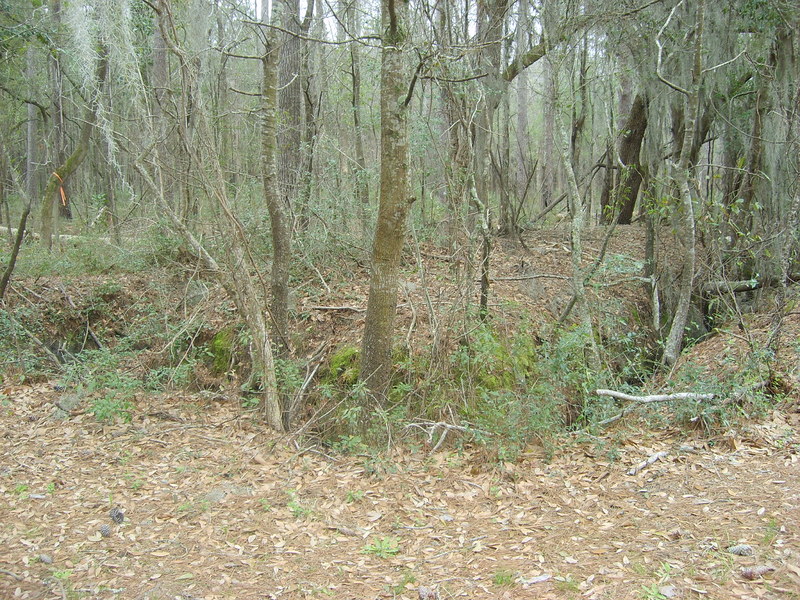 From the origins of domestication in the prehistoric Woodland Period to modern day tree farming, nothing has transformed the landscape of Stono Preserve more than agriculture. While prehistoric cultivation and subsistence farming on the church glebe lands removed some original old growth forest, they were fairly low impact compared to later rice cultivation and truck farming that altered the landscape in lasting ways. In fact, when the glebe land was advertised for sale in 1807 the description noted that “the uncleared land is well wooded, and therefore the more valuable.”

In the early decades of the eighteenth century, rice production increased throughout the colony, rapidly growing the plantation economy. White planters accumulated vast amounts of land and wealth making Charles Town one of the wealthiest cities in the American colonies. They quickly identified land ideal for growing rice—the Carolina colony’s most lucrative crop. The landscape of Stono Preserve was ideal for rice cultivation because of its low, swampy land, numerous tidal creeks and marshes, and proximity to the Stono River. However, it took incredible labor by enslaved peoples to build the rice canal system to make the land cultivable. Today, historic maps and visible landscape features are evidence of the labor of these people and the property’s rice plantation past.

The location of rice fields, or former rice fields, are noted on plats dating to 1799, 1806, and circa 1807, with most of those rice fields located west of Willtown Road (now Dixie Plantation Road). These former fields are covered in trees today, but their location is still marked by low-lying, fern-covered wetlands. Remnants of the canal system enslaved peoples used to control water flow in and out of rice fields provide visual reminders of their labor – not only their work in tending to the rice fields, but also the construction of the earthen works needed to grow rice. The most prominent feature of this system is a double canal that drains directly into the Stono River marshes. Just south of the double canal, running parallel to it, are a series of equally spaced single canals. Rather than draining directly into the river, these canals led to the largest of three holding ponds. 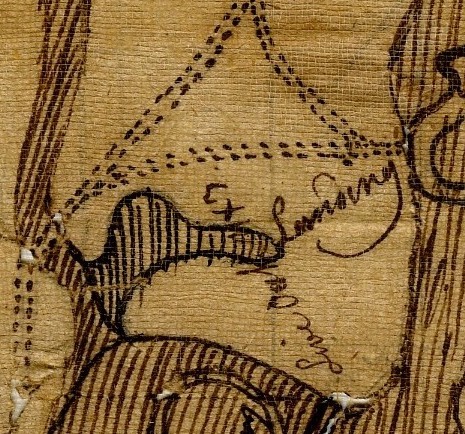 Detail of plat depicting one of the boat landings, 1807, courtesy of South Carolina Historical Society. Water access was important for plantation owners so that they could move their rice and other crops to the Charleston markets and port.

Boat docks and landings were also vital aspects of the eighteenth- and nineteenth-century agricultural landscape of Lowcountry plantations. Road travel was dusty and difficult, and the railroad had not yet reached the area. Plantation owners organized the transportation of harvested rice and other crops to Charleston’s markets and ports via the waterways. Two boat landings are noted on the circa 1807 plat. Features related to the former boat landings are still present today. At one landing a small brick pad, likely a foundation pier, and a linear area of intact bricks still remain. At low tide, horizontal wooden beams, possibly from a dock, are still visible. The remains of the second boat landing, also visible at low tide, are piers constructed of brick, cement, and wood. The different materials likely represent the construction and maintenance of multiple docks throughout the years. 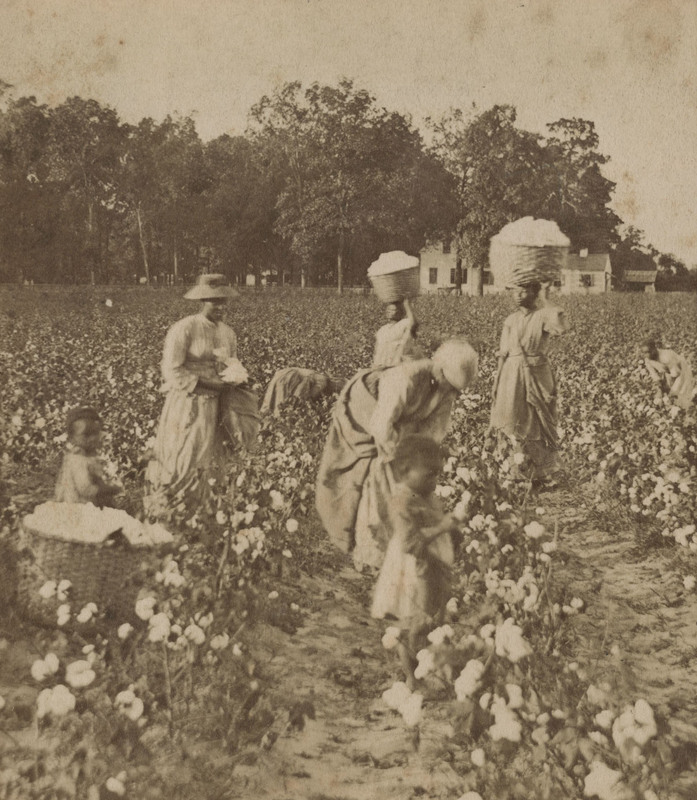 Women and children working in a cotton field, Georgia, circa 1860s, courtesy of Avery Research Center for African American History and Culture. 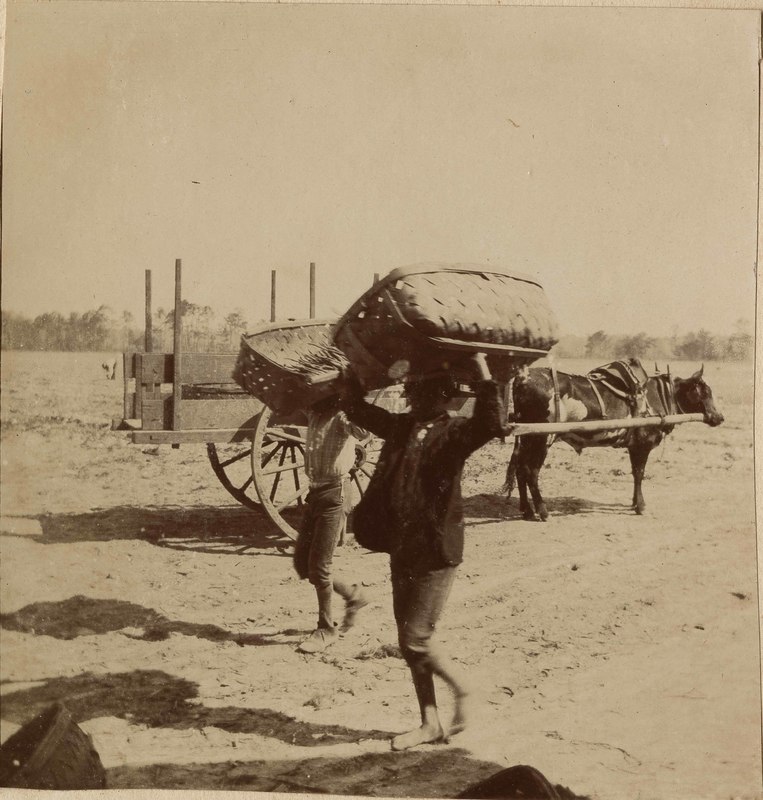 While rice dominated the eighteenth-century Lowcountry plantation landscape, South Carolina planters diversified their crops by the turn of the nineteenth century. Rice remained culturally and economically notable, but many planters turned to cotton as their cash crop. On the Sea Islands, they grew the incredibly profitable Sea Island cotton. These changes in agricultural practices are part of the changes that took place at the Stono Preserve. In the early nineteenth century, the property then consisting of 1,309 acres, devoted only 135 ¾ acres to rice cultivation. This relatively low acreage may reflect the Lowcountry’s shifting agricultural practices at the turn of the nineteenth century when many planters switched from rice to cotton. Cotton’s popularity and profitability was a selling point when the St. Paul’s vestrymen advertised the sale of the glebe lands along the Stono River in 1807. Their newspaper advertisement stated the land was “good quality for cotton.” That same year, the vestry recorded in their minutes that Joseph Fickling, who owned the lands south of their glebe and most of what is today the Stono Preserve, promised he would pay them back rent for use of the lands he planted after he sold his “bales.” The bales—a term for prepared and packed cotton—helps confirm that cotton was being grown on the land. With this shift from rice cultivation, the containment ponds drained and returned to wetlands and the canals began to fill in.

After the Civil War ended slavery—removing the foundation of southern plantation economy—southern agricultural practices changed dramatically. In South Carolina, nearly 60% of the population was enslaved and serving as the backbone of the labor model. Now, they were freed people who sought to earn a living and provide for their families. Consequently, tenant farming and sharecropping became the dominant agricultural practices throughout the South, with tenant farming dominating in the Lowcountry. Landowners turned away from labor-intensive crops such as rice and diversified, cultivating more corn, potatoes, melons, and other vegetables. This later led to truck farming, which increased when the boll weevil pest decimated the cotton crop in the early 1900s.

Historic maps and archaeological excavations document the shift from enslaved labor to tenant farming. In 1863, during the Civil War, Fredrick Richards purchased the property from Benjamin Bailey. Archaeological evidence indicates that at the end of the war some people moved away while others continued to live in the same location, at least for a short time. By 1880 newly freed people abandoned the slave settlement and relocated nearby as tenant farmers. In 1882 Ann Eliza Richards left “Dixie Plantation” to her son Frank. This is the first reference to the property by a name other than that of the current owner. Under Frank Richards, the property was productive, due mostly to the labor of the tenants. The tenant farmers and perhaps other hired laborers harvested timber, raised livestock, and grew a variety of crops.  A 1912 plat illustrates three houses on the west side of the property well away from the former slave settlement, and a 1918 map shows additional structures, including a barn, east of the avenue of oaks near a natural spring. This clustering may suggest communal use of work-animals and tools. 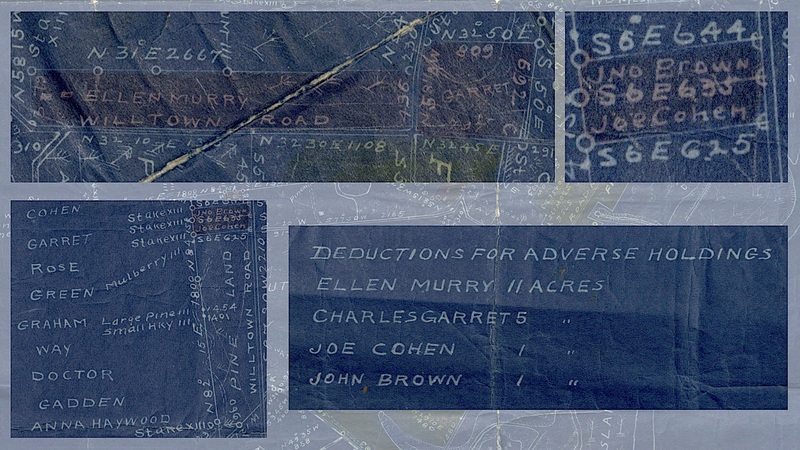 Composite details of Dixie Plantation plat depicting African American land holdings, 1913, courtesy of South Carolina Historical Society. Surnames from this plat match surnames of African Americans living in the same location recorded on the first census after the Civil War, increasing the likelihood that the early-twentieth century tenant farmers were descendants of people enslaved on the property.

A 1912 plat and the 1917 Title of Abstract provide information about several individuals who were tenant farmers on the property. These four individuals, Charles Garrett, Ellen Murray, Joe Cohen, and John Brown are described as “Negros” who had gained legal title to small sections of the property along Willtown Road. How they acquired their land is unknown; however, these four individuals accomplished a major feat. They acquired land either during Reconstruction or under Jim Crow, which made it difficult and sometimes dangerous for freed people and their descendants to own land. While it is difficult to confirm the four land-owning African Americans, including one woman, were descendants of slaves who worked the land they now owned, its likelihood is not improbable. Lowcountry freed people regularly stayed on the same or surrounding property where they were once enslaved. With names of the enslaved infrequently mentioned in the historical record it is difficult to make a direct connection. However, the first post-Civil War census of 1870 lists surnames that match the names of black landowners on the 1912 plat and 1917 Title of Abstract: Ellen Murray born in 1845, and the family names Garrett, Cohen and Brown (though Brown is a common name). This greatly increasing the possibility that Charles Garrett, Joe Cohen, John Brown, and Ellen Murray were descendants of once enslaved peoples who worked the land of Stono Preserve. 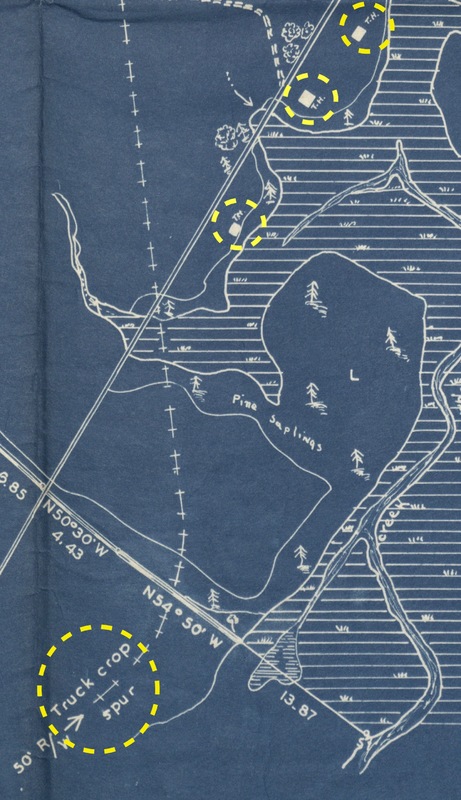 Changes in transportation brought changes to the landscape. On January 28, 1916 a right-of-way strip of land was deeded to the Seaboard Air Line Railway Company. By the next year, railroad tracks were completed through the north portion of the property. By 1917 trains were moving over the property and that same year land was deeded for a “truck spur” that ran southwest from the main line toward the Stono River and the boat landing noted on the 1807 plat. Maps dated between 1919 and 1943 show structures, some labeled “TH” (tenant house), constructed near that truck spur. Farmers living in those structures now had an easy way to transport their produce to Charleston and elsewhere via the railroad.

Tenant farming at Dixie Plantation ended by the early 1940s. Documents from 1935 and 1936 note that a lawyer working for the Williams family, property owners at the time, informed Holly B. Smoak, a tenant farmer living on the property, that he was to vacant the property and offered him a settlement for his crops. In the 1940s, John Henry Dick, who had recently acquired the property, used the surviving tenant houses for his guests and employees who lived on site. Two of these former tenant houses still stand on the property, while brick piers and chimneys mark the location of three others. With Dick’s ownership, the traditional agricultural use of the property came to a close.

← Antebellum Period
The Landscape of Wealth →