Many colonists in the newly formed St. Paul’s Parish arrived directly from England or through Barbados, colonized by the English, while others came from France, Germany, Scotland, Ireland, and Switzerland. While navigating different European cultures, English colonists were also negotiating the cultures of the enslaved African population and the enslaved and free Indigenous peoples already living in the Lowcountry. Of these groups, enslaved Africans were by far the majority population in St. Paul’s Parish. English colonizers’ establishment of parishes significantly altered the frontier landscape by building houses, roads, bridges, and ferries along with rice canals and cleared land for fields. 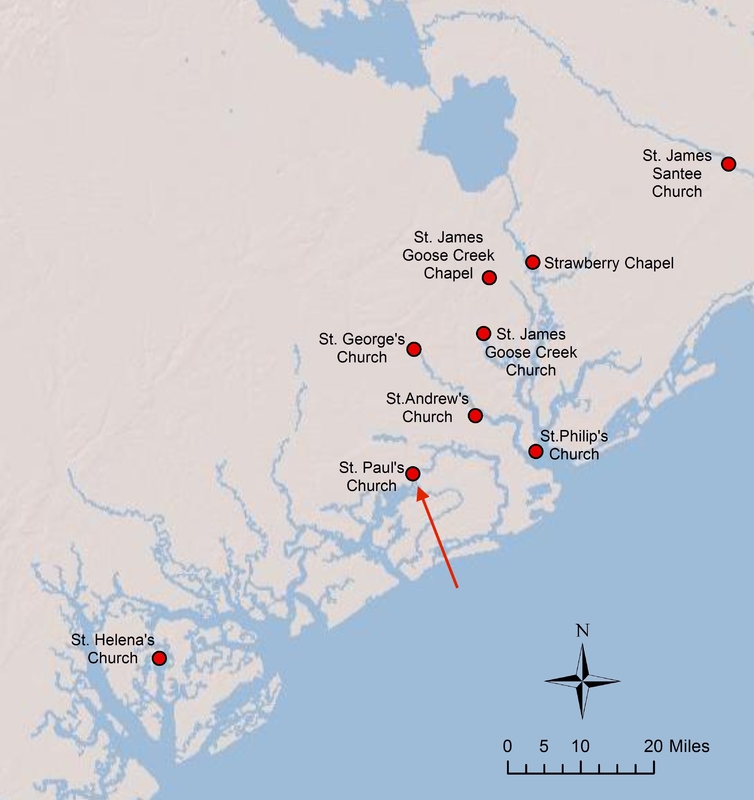 Mapped locations of Anglican churches between 1706-1725, created by Kimberly Pyszka, 2012.

With such a diverse population came religious diversity. Reverend William Dun, the first missionary assigned to St. Paul’s Parish, sent a letter in 1708 to London outlining the religious diversity in a parish census as he saw it. Dun wrote that his parish “…contains about 150 Christian families consisting of more than 300 Soul (besides Young Children) about do whereof 80 profess themselves of the Church of England; the remaining 220 are Dissenters of all sorts; thus 150 Presbyterians, 8 Independents, 40. Anabaptists, 10 Quakers, & above 12 others, whom I cannot tell what to make of.” Dun’s census is important because it also provides information on the non-European residents, who comprised the majority of its population. He wrote, “There are likewise in my Parish of Heathens and Infidels, besides their young Children, about 1400 Souls, about 1000 whereof are Negro and Indian Slaves and the remaining 400 free Natives.” Dun’s categorization of people who were neither European nor Christian reflected the cultural tensions and power dynamics that existed among the populations of colonists, Indigenous peoples, and enslaved Africans who occupied the land on and around the newly established St. Paul’s Parish.

As early as 1706, enslaved Africans made up the majority of the colony’s population. Captured by slave traders from different locations, primarily West and Central Africa, enslaved peoples brought with them their own diverse religious beliefs. While some were either Christian or Muslim, many enslaved Africans practiced numerous traditional African religions, bringing with them worship of specific deities associated with their nation or region. Indigenous peoples, both free and enslaved, continued to have a significant presence in the early 1700s. Similar to enslaved Africans, the Indigenous peoples were from several distinct cultural groups with distinctive spiritual practices. As the minority population, white settlers were fearful of uprisings from the people they enslaved and the surrounding Indigenous peoples whose land they now occupied. In the first half of the eighteenth century, St. Paul’s Parish witnessed uprisings from both groups, first during the 1715 Yamasee War, and later in the 1739 Stono Rebellion. The Yamasee Indian War had the most direct consequences for St. Paul’s Parish residents and the colony’s trajectory. 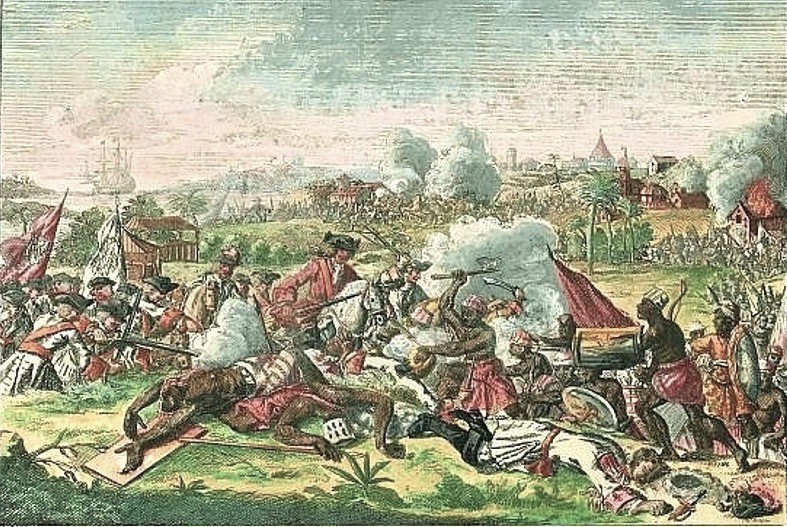 The impetus for the Yamasee War (1715-1717) was rooted in several issues: colonial traders’ abusive trading practices that drove Indigenous peoples into debt, the Native American slave trade, colonists' encroachment on Indigenous peoples' lands, and the depletion of natural resources. Recent scholarship also accounts for colonists’ infractions against the social and cultural values of Indigenous peoples. For example, as matriarchal societies, violence against women was an affront against the individual, the group, and their social values. The diverse, politically and ethnically fractured population of the parish and the colony caused the St. Paul’s Parish landscape and demography to be deeply impacted by the war. 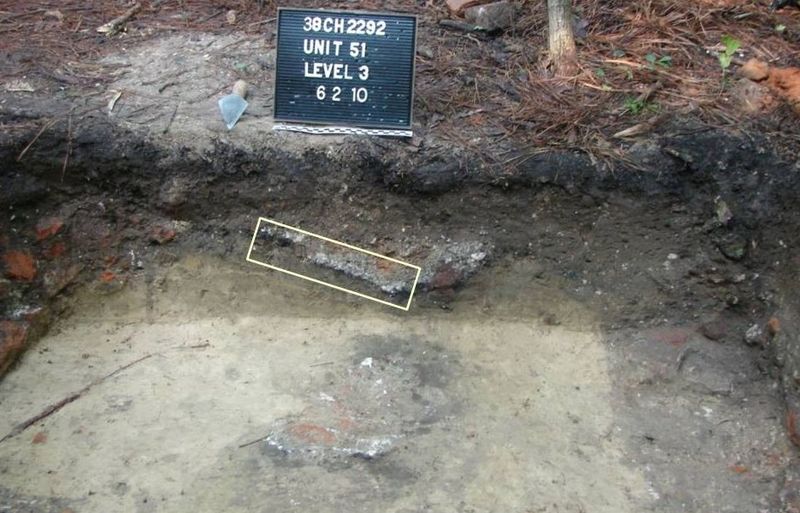 Charcoal and ash (within the box), along with burned artifacts, provide evidence of the fire that destroyed St. Paul’s Parish parsonage in late July of 1715.

In April 1715, members of the Yamasee Confederation to the south (near present-day Beaufort) attacked and killed English traders and several white settlers in St. Helena’s Parish. In July of that year, they advanced from Yamasee towns destined for Charles Towne. As they moved through St. Paul’s Parish, they are reported to have killed seventy parishioners and significantly altered the landscape by burning twenty houses, including the parsonage. Notably, they did not damage St. Paul’s Church, sparing the spiritual space just as they had spared a church in Port Royal. Colonial militia halted the advance of the Confederation near the Stono River ferry, located approximately one mile upriver from St. Paul’s Parish Church.

The Yamasee War brought about several important structural and social changes. The enslavement of Indigenous peopled abruptly ended, and colonists shifted exclusively to the import and enslavement of Africans. Colonists continued to assert power and manage their fear of uprisings by writing race-based laws that regulated and segregated Europeans and Africans. In the years following the Yamasee War, the population of the parish increased significantly. Some of this growth may be attributed to white settlers' comfort moving to these frontier parishes because the Yamasee War caused Indigenous populations to move westward or south to Spanish Florida. 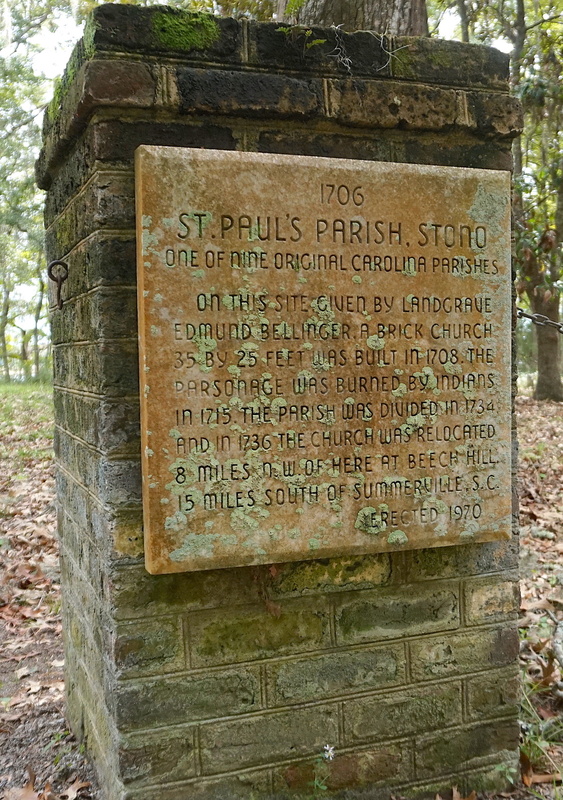 The parish also experienced growth as colonists successfully established a profitable agricultural economy based on the use of enslaved Africans and rice cultivation. By 1720, rice cultivation dominated the flourishing colonial economy. The tidal waterways of St. Paul’s Parish made it an ideal location for rice fields. As a response to the growing population, in 1734 parish supervisors and the General Assembly divided the parish. St. Paul’s Parish was now the inland region while the new parish—St. John’s, Colleton Parish—consisted of the Sea Islands located in the southern half of the original parish. With this division, St. Paul’s Parish Church was no longer centrally located. To rectify this, parish leaders established a chapel of ease more centrally located within the newly drawn boundaries. While services continued at the original parish church along the Stono River into the 1750s, the more centrally located chapel of ease became the parish church. Today, the only visible reminder of St. Paul’s Parish Church is its churchyard with four gravestones dating to the first half of the eighteenth century and a memorial placed on a column at the churchyard’s entrance by members of St. Paul’s Episcopal Church in Summerville, the descendant congregation of the original parish.