The Landscape of Religion 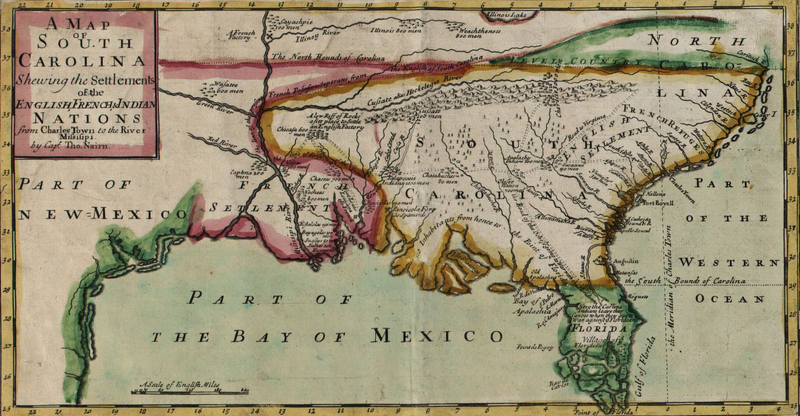 Map of colonial South Carolina, from "A compleat description of the province of Carolina in three parts," published by Edward Crisp, England, 1711, courtesy of Library of Congress Geography and Map Division.

From the founding of the Carolina Colony in 1670, religion played an important political and social role in the lives of white Carolinians. The Lords Proprietors developed the colony’s founding principles and laws, while also envisioning a religiously tolerant colony. However, they also made it clear that the Church of England was the colony’s “only true and orthodox” religion. Despite this, the Carolina colony still attracted dissenters—non-Anglicans who were not members of the Church of England—including Presbyterians, Anabaptists, Quakers, Independents (Congregationalists) and, French Huguenots.

An excerpt from the 1706 Church Act, South Carolina. Enacted on November 30, 1706, the Church Act established the Church of England as the official church and divided the colony into ten parishes with St. Paul's Parish one of the ten. The parish vesteries became the only form of local government up until the Revolutionary War.

By 1700 tensions developed between the Church of England Anglicans and the non-Anglican dissenters. This resulted in the 1706 Church Act which firmly established the Church of England as the colony’s official religion and provided for a system of taxation for its support.  This same act outlined the ten parishes of the colony and called for the building of a church and parsonage in each. St. Paul’s Parish was one of these ten original parishes. While St. Paul’s Parish established the Church of England as the official religion, the large populations of enslaved Africans and Indigenous people resulted in a diversity of religious practices in the parish. The parish was established along the colonial frontier at a time when these three populations—colonists, enslaved Africans, and Indigenous peoples—were in regular conflict, resulting in attacks, wars, and slave uprisings.