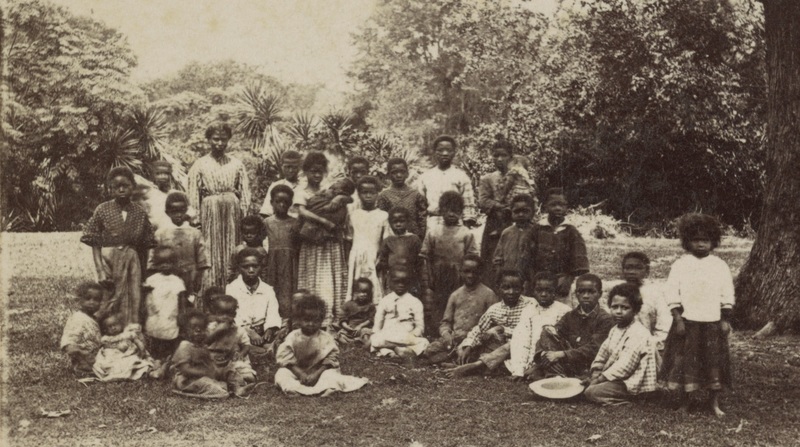 One of the Lowcountry’s unique experience during the Civil War became known as the Port Royal Experiment, which began when Union forces occupied Lowcountry islands in 1861 where approximately 10,000 enslaved people lived. It was a moment of immense joy for many African Americans as the freedom they had long prayed for seemed to finally have arrived. Upon hearing shots fired nearby, Wallace Quarterman recalled the events unfolding on his plantation on St. Simons Island:

“And he call me and told me to run down in the field and tell Peter [the driver] to turn the people loose, that the Yankee coming. And so I run down in the field and, and whooped and holler, they done, he done told them Mr. Gaeggles (?) said turn the people loose because the Yankee coming… And that, the people then throws away their hoe then. They throwed away they hoe, and, and they call we all up, you know and, and give we all freedom because we are just as much as free as them. Now you understand.”

Until President Lincoln signed the Emancipation Proclamation in 1863, these African Americans occupied the liminal space between slavery and freedom as military “contraband.” After enslavers fled the area, African American people who lived on the islands were assisted by US military forces and private northern philanthropic groups and missions with the goal of transitioning African Americans from enslavement to freedom. For example the white woman Laura Towne helped establish the Penn Missionary School there after arriving in 1862. African Americans were provided with food, clothing, and medical assistance while also being directed by the US military to harvest the valuable sea island cotton. It also became the military’s recruiting ground for African American men to join the Union military, which left women to care for their newly freed families. Northern missions were also there to provide education, making those schools South Carolina’s first Black schools. 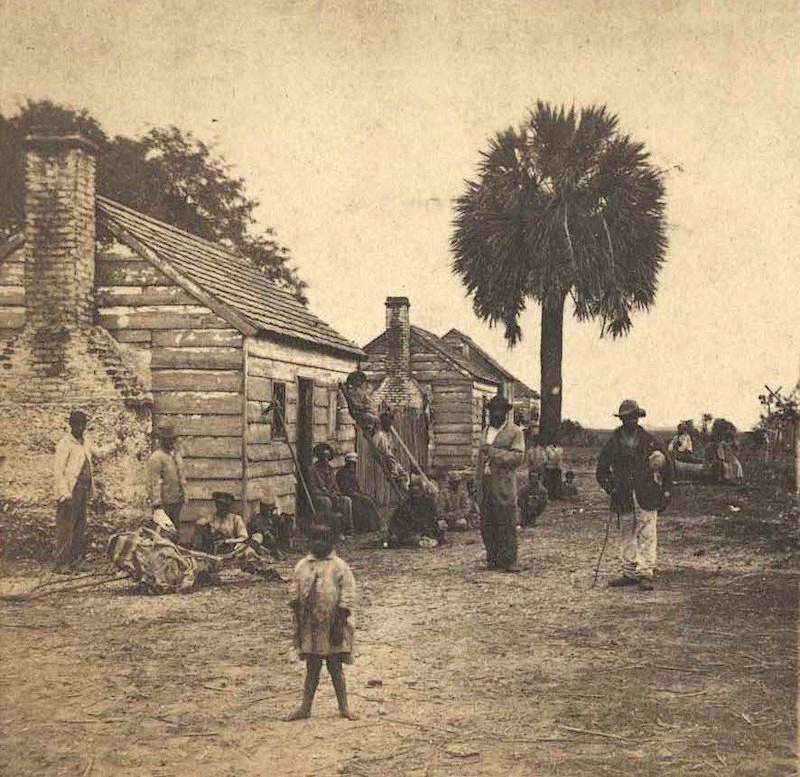 A group of African Americans in a street scene with cabins in the background, photograph by Sam A. Cooley, Port Royal, South Carolina, circa 1860, courtesy of the Beaufort County Library.

While the goal of many northern missions and philanthropic groups was to transition enslaved people to self-sufficient freedom, the US occupying forces were not prepared for this endeavor, which led to fear and uncertainty among the African American population. Some simply wished all these people would leave. For example the enslaved cook of Laura Towne apparently felt that the local people "would be glad if all the white people would go away and let them live by themselves." And life in refugee camps was harder still. The African American nurse Susie King Taylor described some of the difficulties facing families living in camps on St. Simon’s Island in Georgia:

"There were about six hundred men, women and children on St. Simon’s, the women and children being in the majority, and we were afraid to go very far from our quarters in the daytime, and at night even to go out of the house for a long time, although the men were on the watch all the time; for there were not many soldiers on the island, only the marines who were on the gunboats along the coast. The rebels, knowing this, could steal by them undercover of the night, and getting on the island would capture any persons venturing out along and carry them to the mainland. Several of the men disappeared, and as they were never heard from we came to the conclusion they had been carried off in this way… The first colored troops did not receive any pay for eighteen months, and the men had to depend wholly on what they received from the commissary, established by General Saxton. A great many of these men had large families, and as they had no money to support them, their wives were obliged to support themselves and children by washing for the officers of the gunboats and the soldiers, and making cakes and pies which they sold to the boys in camp." 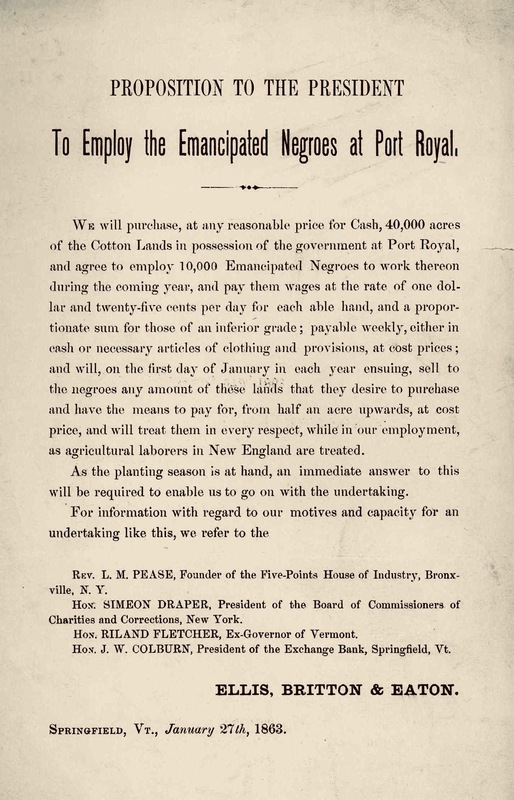 "Proposition to the President to Employ the Emancipated Negroes at Port Royal," Ellis, Britton, and Eaton, Springfield, Vermont, 1863, courtesy of the Library of Congress.

Despite the unsettled nature of transitioning to freedom during war, African Americans living on these Union-occupied sea islands led more autonomous, independent lives. Some families owned and worked their land to provide food for themselves and also sell crops. Others worked on land that had quickly been bought by northerners who then paid African Americans for their agricultural labor. Unhappy with some of the wages and market prices, freedpeople were also experimenting with strikes and bargaining. Their experiences hence contrasted with the suffering, disease, and poverty endured by refugees in Union controlled "contraband" camps elsewhere.

The Port Royal Experiment also revealed newly freed African Americans’ interests. They wanted education and land to pursue their desire for economic and personal independence. Local and federal forces made land ownership difficult to navigate, though some African Americans managed to hold onto their land well after the Civil War and Reconstruction era ended. Their value of education is seen in the survival of schools. The Mather School remained in operation on the island from the 1860s to the 1960s, and the Penn School went on to become the Penn Center, a cultural heritage and community center still open today.

← Enslaved Women in the Civil War
Emancipation and Thereafter →