Women's Work with Rice and Cotton 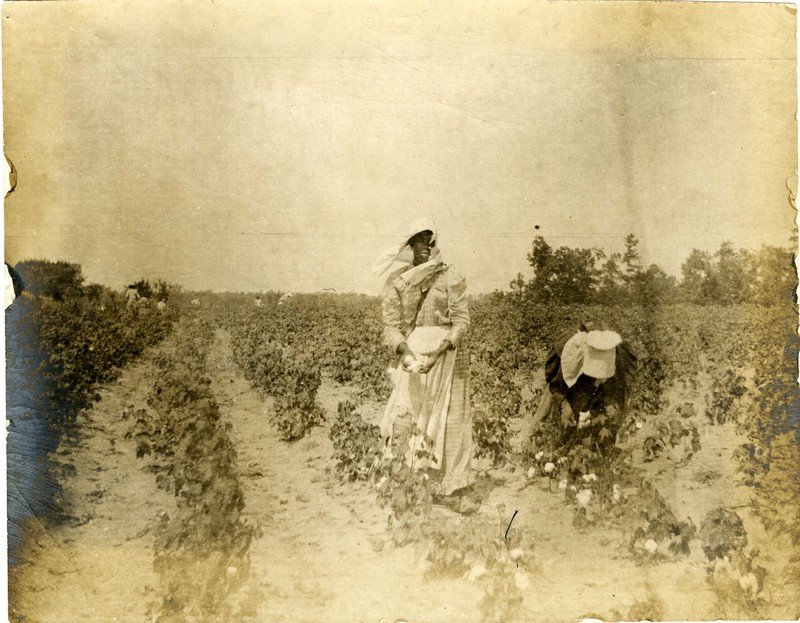 Bonded women were integral to the productions of Carolina gold rice and sea island cotton, the two major cash crops of colonial and antebellum Lowcountry. During the colonial period, rice dominated the landscape, and slaveholders increased the demand for enslaved Africans used to carry out the labor. In rice-growing regions of West Africa, women managed rice agriculture from cultivation to cooking, and women were also well-used in rice agriculture in the Lowcountry. By the early nineteenth century, however, rice exports stagnated as the market became more competitive, and many Lowcountry plantation owners switched from growing rice to sea island cotton. Like rice, the economic success of sea island cotton resulted in wealthy Lowcountry enslavers and a high enslaved population. With short-staple cotton grown in the South Carolina backcountry and sea island cotton along the coast, the state’s economy was heavily dependent upon cotton by 1830. South Carolina’s economic success, therefore, was the direct result of enslaved women and men’s labor. Rice was still culturally significant and continued to be grown, particularly for subsistence, but it did not maintain its economic dominance. Therefore, in the early nineteenth century, South Carolina grew the largest percentage of rice exports in the United States compared to other states, but cotton became king. 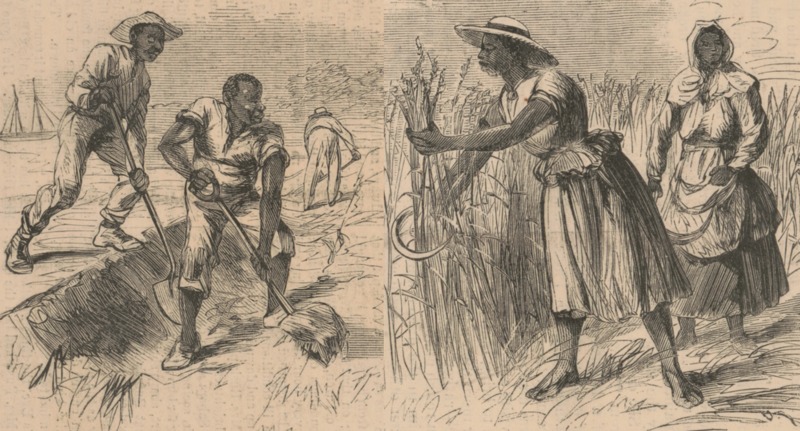 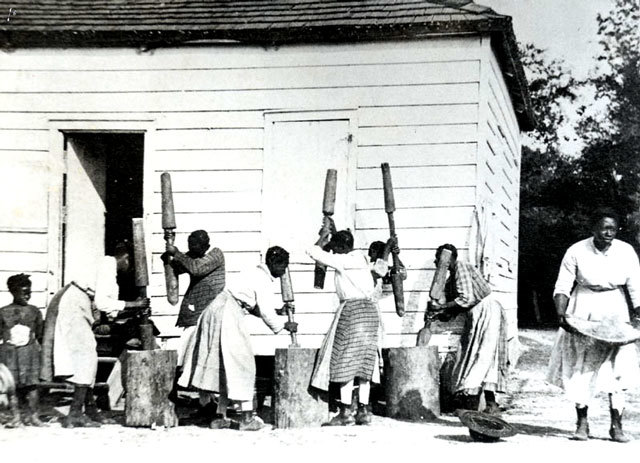 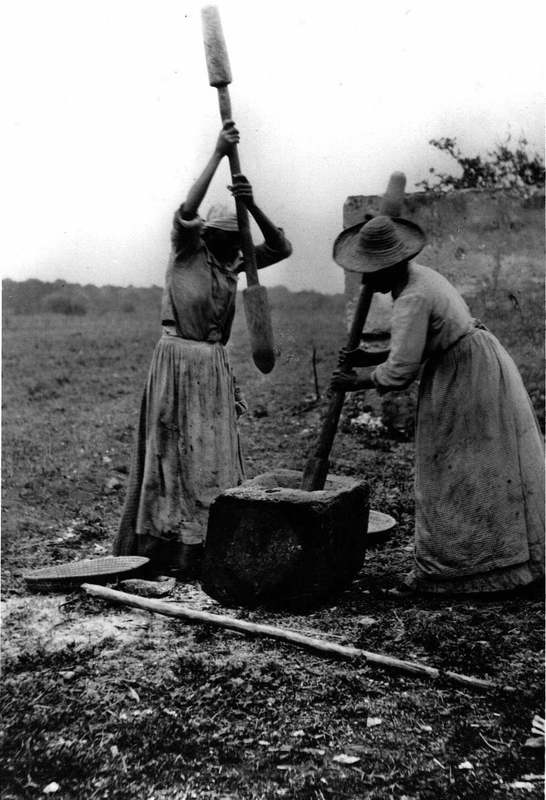 The labor of African and African-descendant women was vital to Carolina gold rice flourishing in the swampy coastal region of Georgia and South Carolina. In rice-growing regions of West Africa, women taught their daughters how to plant, harvest, process, and cook rice. Some of these women were forced to the Lowcountry, particularly in the early colonial period, and enslavers used these women's skills to purse commercial rice cultivation. Once in the Lowcountry, all women working in rice fields continued to pass on skills—some inherited and some newly taught—from one generation to the next as women in the Lowcountry continued to be tasked with rice agricultural work. As technology changed, so did some of their processes, but women remained prominent laborers on Lowcountry rice plantations.

The fields themselves brought particular dangers to the women and men who worked them. Dysentery, malaria, and other water-borne diseases and parasites kept the mortality rate among rice field workers high. Infants of women working rice fields also had high mortality rates from exposure to this high-risk health environment. The slaveholding woman Frances Anne Kemble described in her diary how her enslaved women would frequently visit her to discuss their reproductive health. She wrote how one woman, Sarah, had had four miscarriages, and brought seven children into the world, five of whom had been born dead, and other women told her similar stories of the heartbreaking losses of pregnancies and infants. In his slave narrative, Charles Ball described how enslaved people in the South Carolina Lowcountry viewed this labor:

“Watering and weeding rice is considered one of the most unhealthy occupations on a southern plantation, as people were obliged to live for several weeks in the mud and water, subject to unwholesome vapours that arise from stagnant pools, under rays of a summer sun, as well as the chilly autumnal dews of night.”

Charles Ball, from Slavery in the United States, 1836.

Some of the tasks associated with rice agriculture were completed by both women and men, while other tasks were assigned by gender. For example, enslavers more often tasked women with cultivation work, while they tasked men with more heavy manual labor such as digging and maintaining trenches and operating the equipment that controlled the irrigation and flooding. At the beginning of each growing season in the spring, women across the Lowcountry were tasked with planting the seeds. They did so most often by using their heel to create an impression in the muddy clay soil where they placed the seeds. Once the seeds were covered, men then flooded the field using a rice trunk—a wooden apparatus designed to control irrigation and flooding. After the seeds sprouted, women and men alike were tasked with returning to the drained fields to weed by hand. During spring and summer growing season, women and also men worked down the rows of rice to hoe the fields and then harvest the rice. In rice-growing regions along the Gambia river in West Africa, women hand-pounded rice and used fanning baskets to winnow the rice grain from the husk. The same practice and fanning baskets were used in the colonial period, but as demand skyrocketed, enslavers sought new technology to keep up demand. Except when grown for subsistence, manual pounding and winnowing were replaced by rice milling technology, and the tidal rivers provided waterpower to operate the mills. 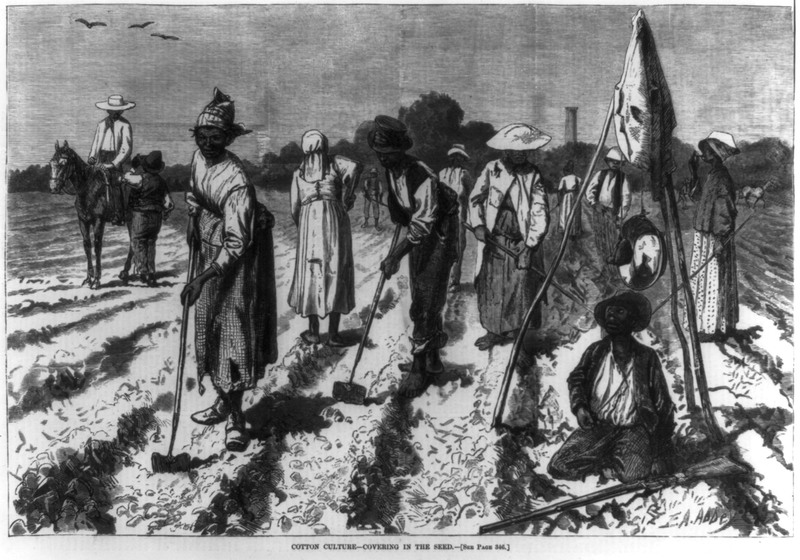 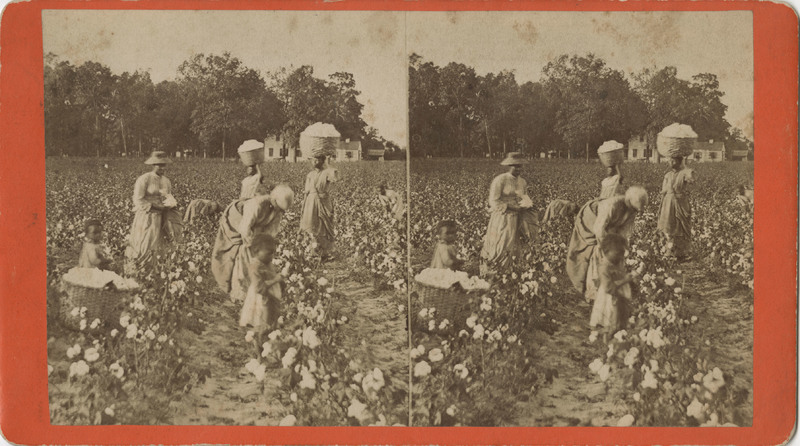 Sea island cotton was grown in the microclimate of costal South Carolina and Georgia, and women were again important laborers in cotton fields as they were in rice fields. Unlike short-staple cotton that was already growing in many parts of the US South, sea island cotton was a high-quality cotton with long, silky threads. Growing six to eight feet tall, sea island cotton was only successfully grown along the coast where the soil differed from inland conditions. Because of the superior quality of the cotton, it also had excellent market value. Plantation owners and merchants in cities like Charleston, Beaufort, and Savannah became incredibly wealthy from the amount of cotton grown by enslaved women and men between the early 1800s and the start of the Civil War.

As a new crop, plantation owners experimented with methods of growing sea island cotton, dictating a variety of tasks to women, men, and children. Under the task system, it was up to enslavers, overseers, or perhaps even drivers to determine the task requirements of each person. Women were regularly assigned a full or three-quarter task, often referred to as full hand or three-quarter hand. Towards the end of pregnancy, their task might be lowered to a half task (or called a half hand), though this was the prerogative of enslavers, not enslaved pregnant women. Not all enslavers felt compelled to reduce the workload of pregnant women in the Lowcountry, in part because tasks assignments and amount were created by enslavers to maximize profits, which often pushed enslaved people to work so hard it most likely affected their health. 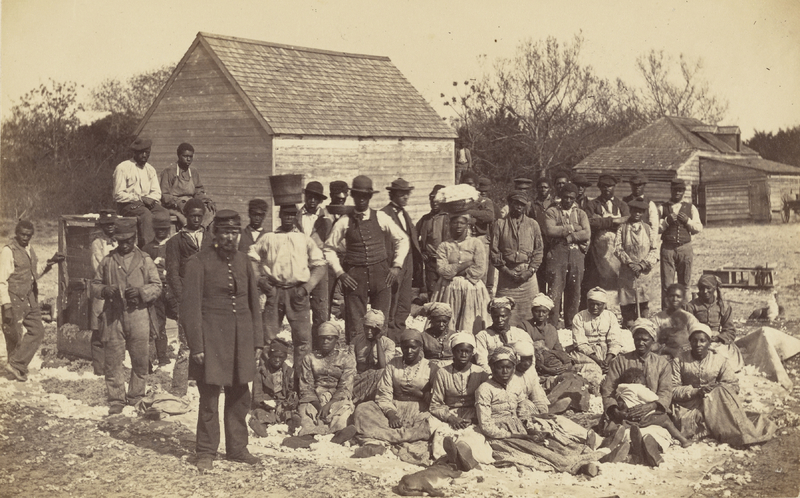 Some tasks related to sea island cotton were assigned to both women and men. Others tended to be assigned based on gender. Women and men planted sea island cotton early in the spring and tended to the fields as the cotton grew. Once it was harvest season, women, men, and even children were tasked with picking cotton, needing to reach both high and low parts of the unusually tall sea island cotton plant. After the cotton was picked, women dried, sorted and cleaned the cotton, a meticulous job to ensure no plant parts besides the white cotton threads and seeds made it into the cotton gin. Men tended to be tasked with ginning, tamping, and transporting the cotton, which went both north in the US and across the Atlantic Ocean bound for Europe.

Swampy landscapes, harsh field labor demands, and the pressure to bear more children all challanged enslaved women working in rice and cotton fields. Mothers additionally faced the burden of meeting harsh labor demands with the needs of their infants for food and nuture. Women also regularly struggled to become pregnant and then to sustain their pregnancies. Infant mortality was high in the Lowcountry. Historian William Dusinberre’s research into Lowcountry slavery on the Manigault family plantations suggests that on their Gowrie plantation, twice as many slaves died as were born between the years of 1833-1861. Moreover, between 1833 and 1864, a staggering 90 per cent of children (to age sixteen) died at Gowrie, an horrific figure, to which Dusinberre notes that stillbirths and miscarriages also need to be added, though are harder to quantify from surviving evidence. He estimates stillbirths constituted about five percent of all births at Gowrie. Therefore, while fieldwork under the task system often offered women more time away from slaveholders and more opportunities to create gendered networks than did domestic labor, a combination of the forced labor of slavery and the unhealthy Lowcountry plantations resulted in poor health conditions that could kill them and increased the risk that accompanied pregnancy and birth, including neonatal tetanus, intestinal illnesses and water borne infections, for example.