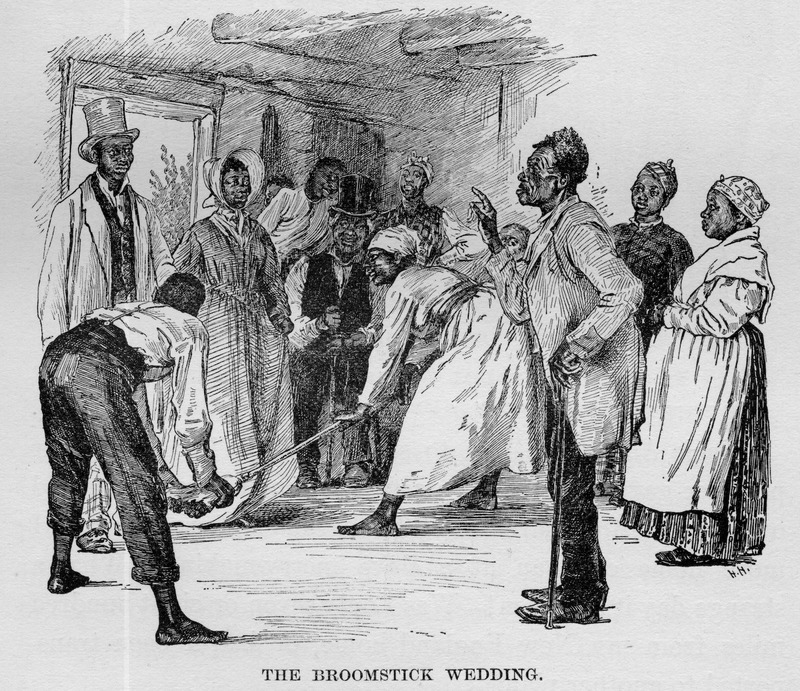 The Broomstick Wedding, from The Story of my Life, or, The Sunshine and Shadow of Seventy Years, by Mary A. Livermore, 1897, Virginia, courtesy of Slavery Images.

Young enslaved people enjoyed the rituals and festivities of Saturday night dances (also known as frolics) where they sang, danced and courted members of their communities. Likewise, these women and men enjoyed the celebrations associated with those entering wedlock. These often involved a religious service in which couples sometimes symbolically jumped over a broom before partaking in a religious ceremony, enjoying food, and dancing thereafter. Recent scholarship explains that jumping the broom, an Anglo-adopted ritual used by some enslaved African Americans, played the important role of validating their marriages in a society where legal marriage was impossible. There is also evidence that it signified entrance into a new life and sweeping away the old. Well aware that enslaved marriage provided an easy route to valuable future offspring, slaveholders regularly sponsored activities related to courtship and marriage on their plantations, or else enabled their slaves to travel to neighboring plantations for social gatherings by granting them written passes: 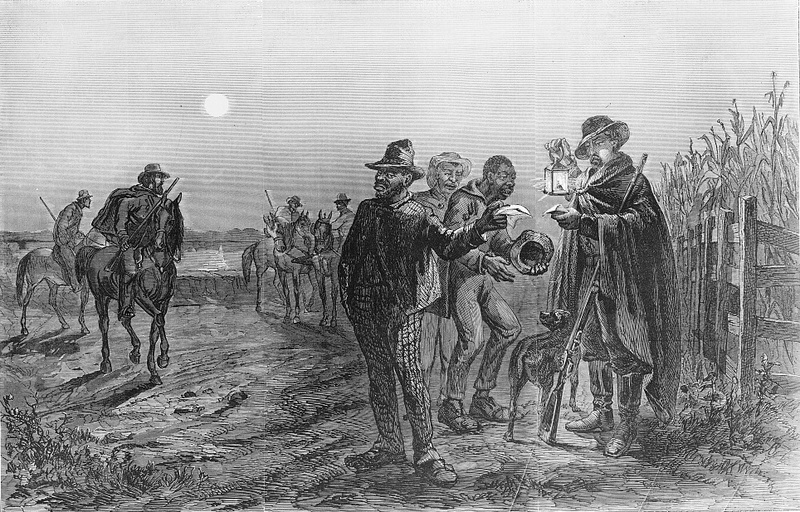 Living under enslavement meant that wedlock and family formations necessarily took multiple forms, including nuclear and cross-plantation marriages, single-parenthood and step-parenthood. Enslavers also forced a minority of women into marriages with men they did not choose, although some pragmatically accepted such relationships over time. However, differing from elite white marriages that were often based on the preservation of wealth and property, enslaved men and women—who could not have legal possessions—married for different reasons. The partnership, support, and connection to the community that accompanied marriage were certainly valuable to enslaved women and men. Courting and subsequent marriage of enslaved couples also illuminates enslaved people’s romantic love for one another as a regular part of their decision to marry. While laws in South Carolina and across the South refused to recognize marriage as legal among enslaved people, enslaved communities in the South regarded matrimony seriously. They not only believed that God sanctioned their marriage, but they also expressed joy in matrimony. Recalling of her parents’ marriage, Isabella Dorroh, explained:

“Befo’ my mammy and daddy married, somebody give a note to take to Mrs. Fair, her mistress. Mistress wouldn’t tell what was in it, but daddy run every step of de way, he was so glad dey would let ‘em marry.”

A memory of her parents most likely shared with young Isabella, this family story reflects the themes found in other WPA narrative and the autobiographies of enslaved women.

Once married, couples then had to cope with slaveholders contradictory attitudes towards enslaved people’s marriages. While slaveholders often sponsored and supported wedding ceremonies in the hope such partnerships would result in children, who slaveholders planned as a valuable labor source, many enslavers also regarded enslaved marriages with disregard. They failed to take couples' marriages seriously, as evidenced by their frequent separation through sale of spouses (and family members). Treated as commodities and resources for the express use of slaveholding families, enslaved married couples faced circumstances specific and traumatic to enslaved African American families. 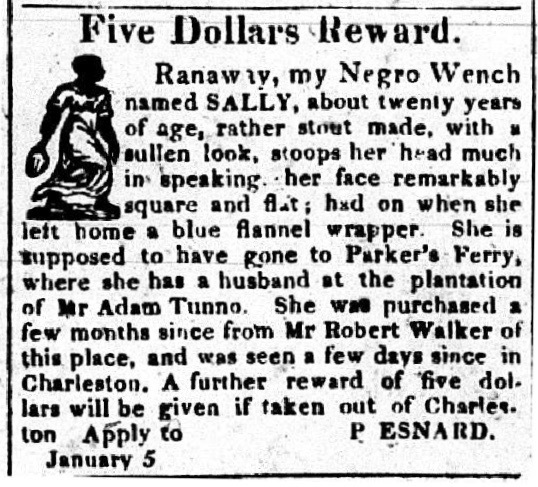 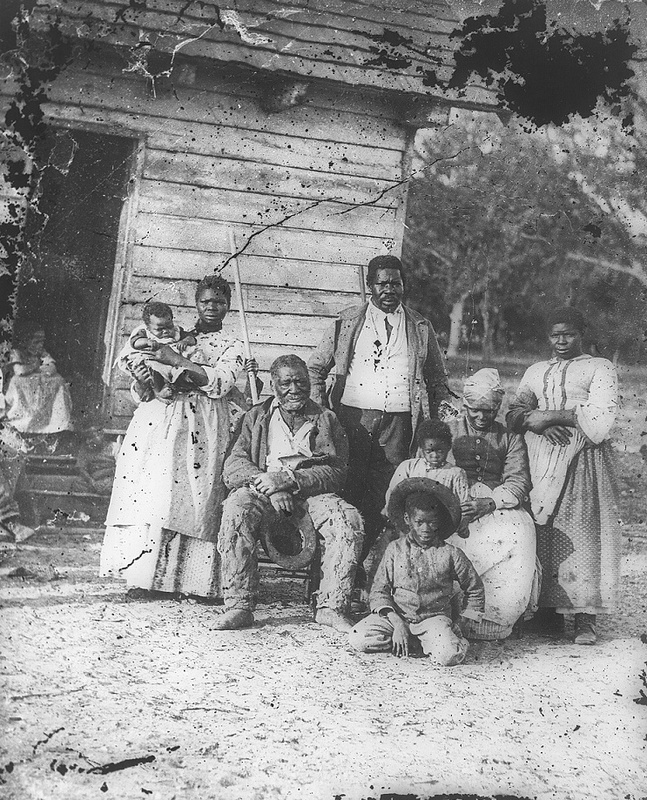 In antebellum South Carolina, around one third of enslaved marriages were cross-plantation marriages or abroad marriages, where husbands and wives had different slaveholders. In these relationships, enslavers chose when and if to provide husbands with slave passes to spend precious time with their wives and children. Most men were able to obtain a written pass from their slaveholder to visit their wives, but some risked travelling illicitly when a pass was denied. Any enslaved person found by the slave patrol without a pass was subject to whipping or other forms of physical violence. Abroad marriages were sometimes stressful for enslaved women as they did not get to spend much time with their husbands because menfolk only visited at weekends. Women in cross-plantation marriages also had to bear the brunt of childcare and domestic chores during the working week. They might largely conduct this work alone or share the responsibility with other enslaved women. In both cases, the choice to raise their children and create a home together was outside of their control. While enslaved men with abroad wives might be spared witnessing the violence enslavers inflicted upon their spouses, the majority of couples preferred to live together. Married during slavery times, Louisa Davis described to her WPA interviewer how her and her husband, Sam, attempted to negotiate the complications of cross-plantation wedlock:

"My husband was a slave of de Sloans and didn’t get to see me as often as he wanted to; and of course, as de housemaid then. Dere was times I couldn’t meet him, clandestine like he want me. Us dat some grief over dat, but he got a pass twice a week from his master, Marse Tommie Sloan, to come to see me… Sam was a field hand and drive de wagon way to Charleston once a year wid cotton, and always bring back something pretty for me."

While polygamous (or plural) marriage had declined by antebellum times, on a few large Lowcountry plantations the practice of men having multiple wives continued. It was much more common for enslaved women to partake in serial marriage after slaveholders sold their husbands away or when widowed. Compared to elite whites particularly, antebellum slavery put some enslaved women in positions of relative independence within wedlock when compared to married white women's daily ‘dependency’ on men. Whether an enslaved woman experienced this degree of gender dependence welcomed or burdensome, it coexisted with the stress of endless labor and exploitation.

Enslaved women also resented slaveholders’ crude attempts at “breeding” even as they often stayed with “husbands” chosen for them rather than by them. Women resented slaveholders forcing or otherwise cajoling them into wedlock with a man they did not know or choose, particularly as they witnessed enslavers motivated not by their wellbeing but by the profits from a labor model that forced women to bear children. Slaveholder interventions meant marital relationships took multiple forms and were sometimes accompanied by complex emotions. Although born in South Carolina after emancipation, Willie McCullough conveyed in some detail the stories his mother had passed on to him as a child. McCullough claimed neither his mother nor his grandmother could choose their husbands while enslaved, and when his mother reached sixteen years of age:

"Her master [Billy Cannon] went to a slave owner nearby and got a six-foot man, almost an entire stranger to her, and told her she must marry him. Her master read a paper to them, told them they were man and wife and told this negro he could take her to a certain cabin and go to bed. This was done without getting her consent or even asking her about it. Grandmother said that several different men were put to her just about the same as if she had been a cow or sow. He later added that his mother 'loved' his father and they wed before American law immediately after emancipation." 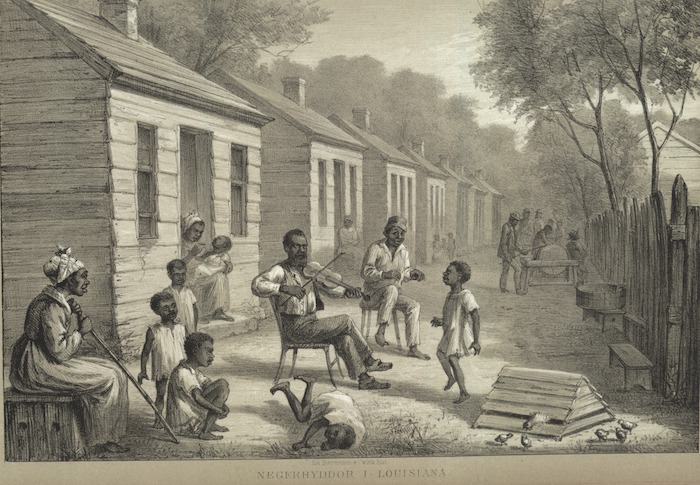 Sketch of enslaved African Americans outside of their cabins, from Sketches from the North American War, 1861-65, Adolf Carlsson Warberg, 1861, courtesy of University of Virginia Library.

In addition to marriages between enslaved people, social norms and legal statutes dictated how other relationships unfolded for enslaved women. A minority of enslaved women entered intimate relationships with free Black men, although, like enslaved marriages, the law failed to grant wedlock between free and enslaved Black couples as legitimate. Interracial relationships between enslaved Black women and white men were also made illegal by various state-based ‘anti-miscegenation’ statutes. That said, bearing children of a white man was common for enslaved women. Short of risking violence or their life by refusing a white man’s sexual advances, enslaved women did not have the ability to avoid the sexual violence of enslavers or other white men, resulting in many children of mixed race. In Charleston and the Lowcountry, as well as the rest of the South, the law stated that these children’s status followed that of their mothers’ as enslaved. Therefore, the law also dealt directly with the legally accepted sexual violence of white men against enslaved women. In turn, married or courting enslaved women regularly experienced traumatic sexual violence that produced children and forced changes to their family they did not have the power to control. Evidence about mixed-race children born to white mothers is rare, but does exist. For example, John C. Brown was raised as though enslaved in South Carolina, despite the fact that his mother was a "white lady" who used to visit his plantation. Brown’s "slaveholders" apparently found him abandoned in a basket and then treated him as though he belonged to them--a slave they acquired for free. Sheton Brown, the plantation carriage driver, later told John Brown after emancipation that he was his father.

← Enslaved Women, Their Families, and Communities
Motherhood and Children →