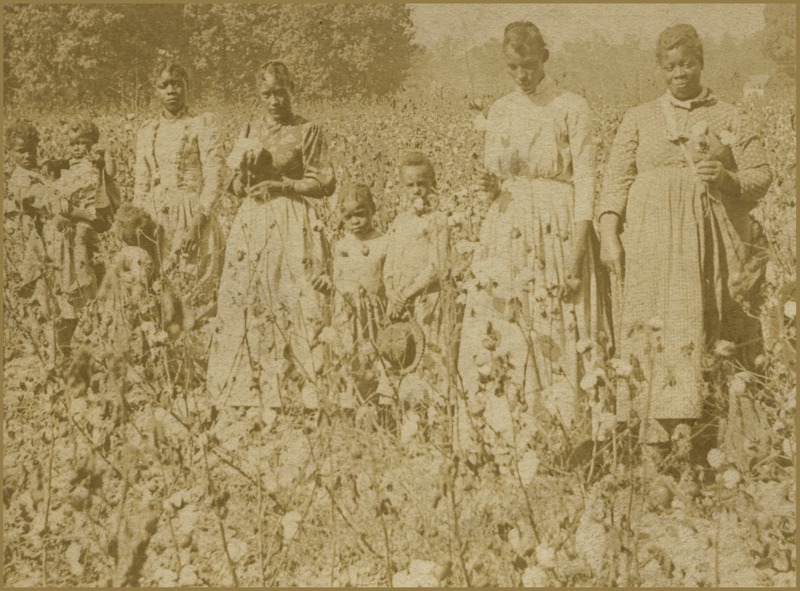 Carte-de-visite of women and children in a cotton field, circa 1860s, courtesy of the National Museum of African American History and Culture.

The majority of Lowcountry enslaved women worked as field hands on plantations. In the South Carolina Lowcountry, rice was the original cash crop but by the nineteenth century a particularly valuable variety of cotton—sea island cotton—accompanied rice as the ruling crop on the plantations these women worked. In Georgia, rice and indigo were common plantation cash crops along the coast. On smaller slaveholdings, women often had to move between house and field labor as their enslavers dictated. Enslaved women’s field labor regularly took place while they were pregnant because slaveholders expected that women would bear children and work simultaneously. They assumed women of African descent were physically, stronger than white women and that they were well-placed to  cope with their dual exploitation as workers and as reproducers. Susan Matthews of Georgia reflected on the work her mother completed through working in the fields and bearing children:

"My ma, she done the cooking and the washing fer the family and she could work in the fields jes lak a man. She could pick her three hundred pounds of cotton or pull as much fodder as any man. She wuz strong an she had a new baby mos’ ev’y year. My marster and mistis liked for [her] to have a lot of chillen ‘cause that helped ter make ‘em richer…" 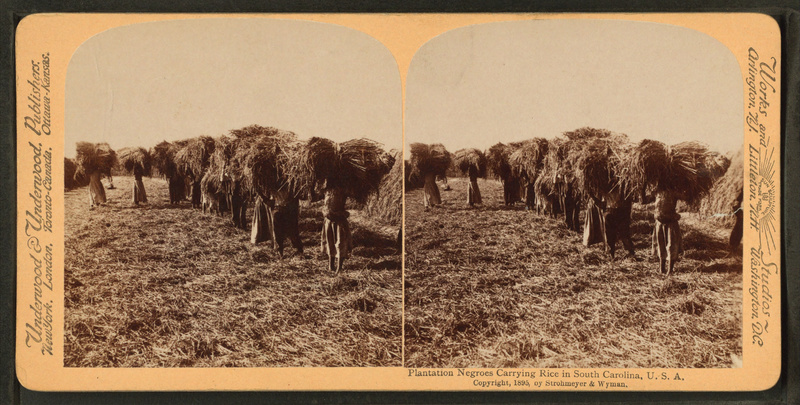 Regionally specific to the Lowcountry, slaveholders’ use of the "task system" as the system of labor among the enslaved. Most enslaved people in the US worked under the "gang system" whereby slaveowners forced them to labor from "sunup to sundown." Black drivers or white overseer supervised the enslaved under the gang system, using their whip to inflict violence on anyone they suspected of neglect of work. This violence was also used to terrorize and control all who witnessed whippings. In contrast, the task system permitted enslaved people more autonomy because slaveholders allocated them a specific "task" or amount of work to complete each day, and thereafter their time (if any remained) was their own. Lowcountry slaveholders hence hoped the task system would incentivize their enslaved people to work harder, and the regime was also suited to the agricultural tasks of rice-growing, which varied considerably over the course of the year. Laboring under the task system still put enslaved people at risk of regular physical violence from enslavers who might deem their work "unsatisfactory." Reflecting how violence was used under the gang system, enslavers operating under the task system still used violence towards some enslaved as a threat of violence towards all, an important method of controlling behavior for whites who were extremely outnumbered by enslaved people in the Lowcountry. This system permitted enslaved people less intense supervision and more autonomy in their work lives. However, because women spent much of this "free" time completing domestic labor for their families, the system did not result in shorter workdays for Lowcountry enslaved women compared to those enslaved elsewhere in the United States. Workload was categorized as full, three-quarter, and half task. Enslavers determined a task amount for each enslaved person based on age, gender, strength, and health. The task assignment changed depending on the season and prerogative of the enslaver. For example, a task in summer on a rice plantation could be to weed a certain acreage of rice field while during harvest season it would switch to pounding a certain amount of rice.

Charles Ball described in his autobiography how working under the task system enabled enslaved families the time to grow food in their own small gardens or patches of land, which was important in supplementing the sometimes-meagre rations of enslavers. Some enslaved people bartered or exchanged goods, as he explained, below:

"We were supplied with an abundance of bread, for a peck of corn is as much as a man can consume in a week, if he has other vegetables with it; but we were obliged to provide ourselves with the other articles necessary for subsistence. Nero had corn in his patch…and my friend Lydia had beans in her garden. We exchanged corn for beans, and had a good supply of both."

Charles Ball, Fifty Years in Chains; Or, The Life of an American Slave (New York: Dover), 1858 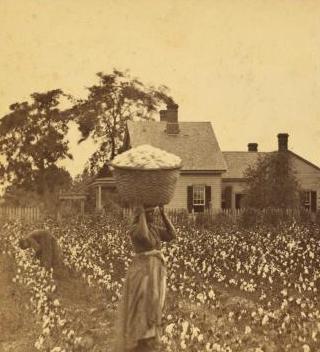 Characterized by its arduousness and monotony, the physical intensity of field labor exposed slaveholders’ defeminizing and dehumanizing attitudes towards enslaved women when compared with their white counterparts. Women in the Southern states tended to work separately from enslaved men in sex-segregated gangs except for during the harvest season when both genders worked alongside each other to bring in the crops. In the Lowcountry, the task system meant people worked more autonomously and independently, but women often labored at a similar intensity as men, while racism meant that enslavers regarded their female slaves as having greater physical strength and resilience than white women and had high expectations of women’s fieldwork. Sometimes women’s strength was a source of pride for family members. Enslaved in Georgia, Isiah Green recalled field work on the plantation he worked on:

“There were 75 plow hands alone, excluding those who were required to do the hoeing. Women as well as men worked in the fields. Isaiah Green declares that his mother could plow as well as any man.” 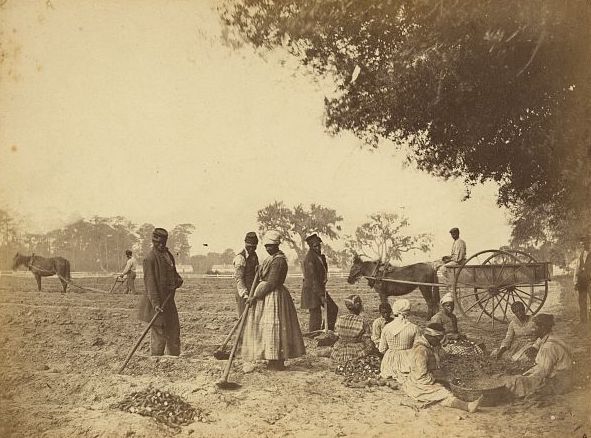 Despite the hardships caused by this enforced agricultural labor, enslaved women found within fieldwork various opportunities for gendered camaraderie, including the opportunity to talk to their peers, share their stories, and sing while they worked. Women relied on each other for help and support, and agricultural labor, especially under the task system with more minimal supervision, permitted women time to talk as they labored, to share their problems and issues, and offer mutual support to those in need.