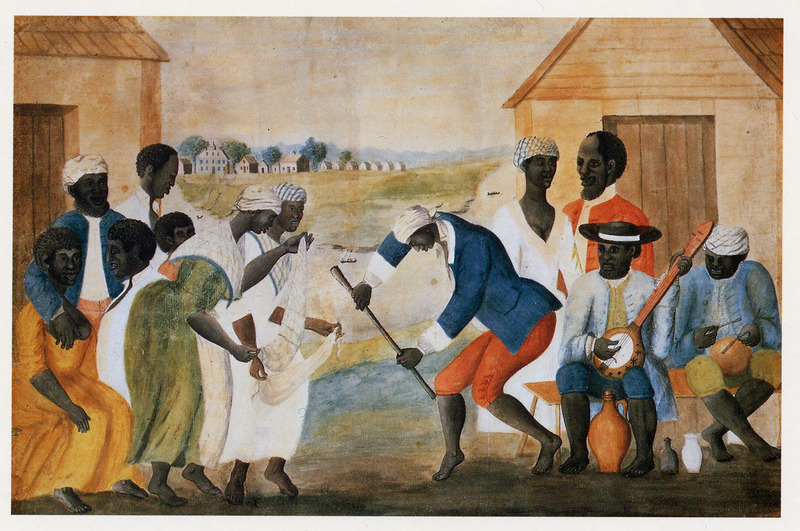 Women in the Lowcountry and across slaveholding states attempted to resist their enslavement through their everyday cultural practices in a variety of ways, including their language, religion, music, cooking and medicinal practices, and the ways in which they dressed and styled their hair. As has been shown, both language and religion enabled enslaved people to create a separate space and a sense of psychological distance from their enslavers, and culture more widely allowed for the assertion of one’s own humanity.

More specifically, women’s cooking and medical practices employed the use of West and West-Central African ingredients and herbs, carrying on ancestral traditions and differentiation of their cooking from those of enslavers provided women with a sense of empowerment. Women used herbs and roots medicinally, including to prevent pregnancies or induce miscarriages, thus denying slaveholders future offspring. Women, as well as men, used their knowledge of herbs and roots to treat their community both with and without slaveholder’s knowledge or approval. Pierce Harper, enslaved in North Carolina, recalled medical practice on his planation for many different ailments including intestinal distress, fever, and intestinal worms.

“Most of the time the master gave us castor oil when we were sick. Some old folks went in the woods for herbs and made medicine. They made tea out of ‘lion’s tongue’ for the stomach and snake root is good for pains in the stomach, too. Horse mint break the fever. They had a verifuge weed.”

"Folks back den never heah tell of all de ailments de folks hab now. Dey war no doctahs. Jes use roots and bark for teas of all kinds. My ole granny uster make tea out o’ dogwood bark an’ give it to us chillun when we have a cold, else she make a tea outen wild cherry bark, pennyroil, or hoarhound. My goodness but dey was bitter. We do mos’ anythin’ to git out a takin’ de tea, but twarnt no use granny jes git you by de collar hol’ you nose and you jes swallow it or get strangled. When de baby hab de colic she gits rats vein and make a syrup an’ out a little sugar in it an’ boil it. Den soon as it cold she give it to de baby. For stomach ache she give us snake root. Sometime she make tea, other time she jes cut it up in  little pieces and make you eat one or two ob den. When you hab fever she wrap you up in cabbage leaves or ginsang leaves, dis made de fever do. When de fever got too bad she take de hoofs offen de hog dat had been killed and parch em’ in de ashes and den she beat em’ up and make a tea. Dis was de most tubble of all." 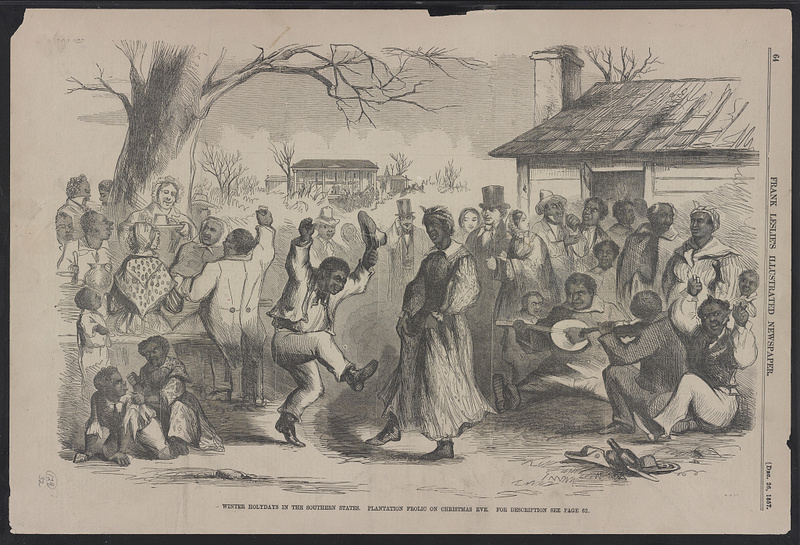 Enslaved African Americans at a Christmas festival as their white enslavers observe, Frank Leslie, 1857, courtesy of the Library of Congress.

Women also found enjoyable ways to culturally resist their bonded status through the simple pleasures of styling their clothing and hair. Wearing brightly colored clothes, especially sashes and hair-scarves colored dyed using natural coloring in plants, and spending time creating elaborate hairstyles for themselves and each other empowered women with a sense of personal and cultural identity. Their personal touches to their appearance were especially important for a Saturday night "frolic" or church on a Sunday. Quilting also enabled the continuation of African practices through the creation of elaborate patterns and the use of bright innovative colors to make beautiful bedspreads and inspire clothing colors. Wearing brightly colored clothing that white slaveholders considered "clashing" hence deliberately upset enslavers’ notions of how enslaved people should look. Because it disconcerted them, women were well aware of this small amount of agency they held. 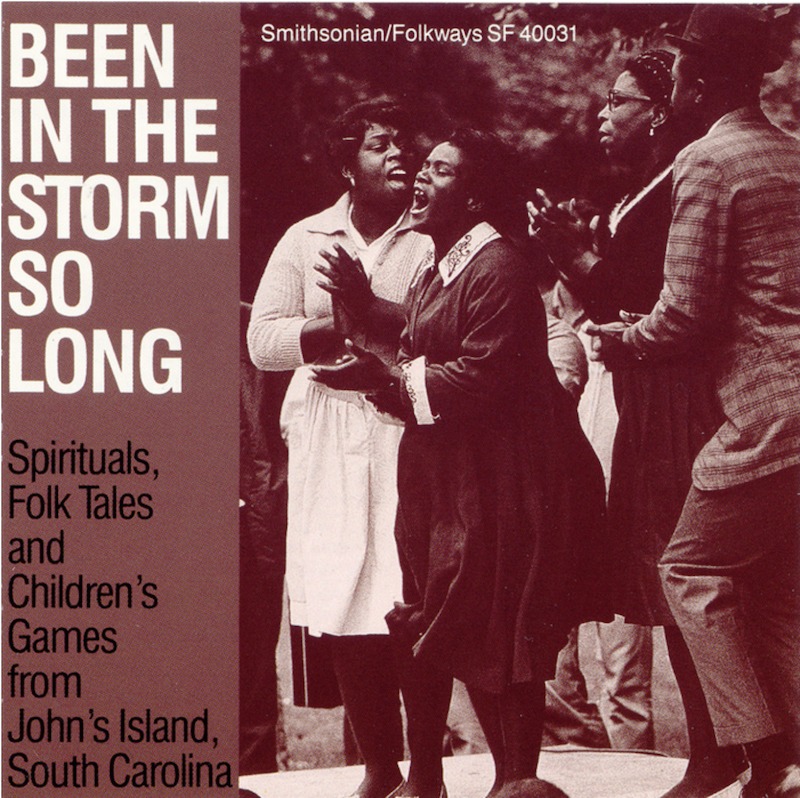 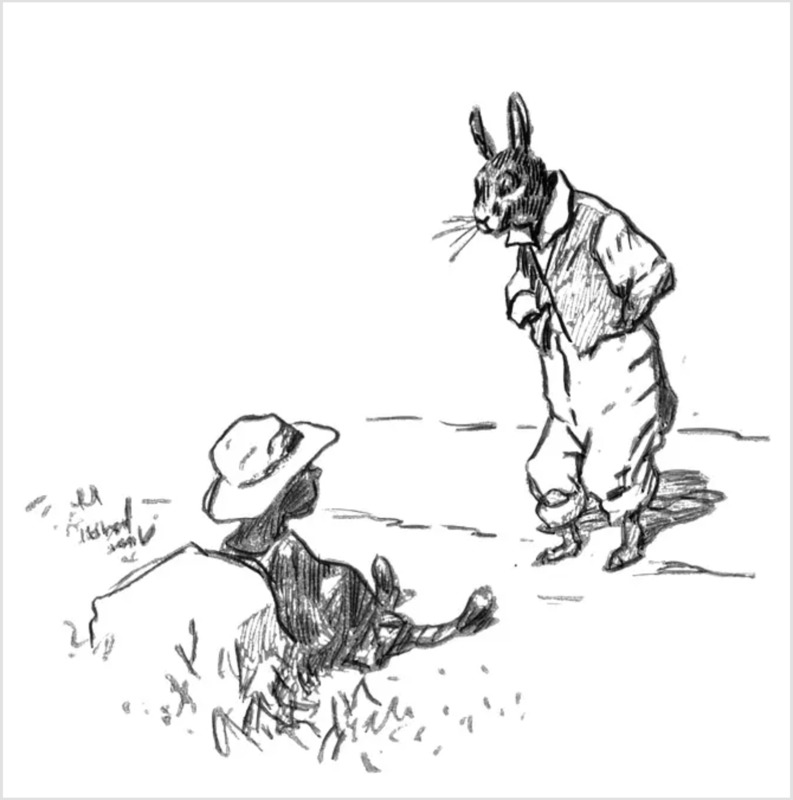 Visiting other slaveholdings for Saturday night frolics also provided relief from the monotony of everyday life. Gendered norms dictated that men, not women, tended to do the visiting, which was also the case for those in cross-plantation marriages as well. Many enslaved people enjoyed partaking in singing, dancing and playing musical instruments, both for immediate pleasure and also in the hope of meeting a member of the opposite sex to court, and maybe later to marry and have children. So, ironically, the opportunities that enslaved women had for self-expression, leisure, and pleasure also served to benefit their enslavers as well. Recognizing the value of allowing enslaved people to socialize, some slaveholders organized their Saturday dances around productive labor, for example at "corn-shucking" celebrations in the fall. Enslavers knew that permitting their enslaved women to court and then marry someone of their own choosing was the easiest way to gain valuable future children for themselves.

Just as food and medical practices provided a sense of continuities with African ancestors, so did storytelling. Enslaved women, men, children enjoyed listening to the traditional stories conveyed by gifted raconteurs, many of which provided coded messages about how to negotiate and survive enslavement. Spoken in Gullah to make it more difficult for whites to understand, Lowcountry enslaved people commonly listed to animal trickster tales, for example those of "Brer rabbit." The roots of these tales, like much of the culture in the world of Atlantic world, is a combination of African, Caribbean, European, and Indigenous peoples’ culture. The African roots of these folktales, though, is evident as plot lines and characters were transported with little change across the Atlantic. The message in such tales was clear: the strongest, largest, most powerful animals did not always win. Instead, relying on one’s wits, ingenuity, and intellect could enabled the powerless to "trick" their way out of dangerous situations. Storytelling hence brought enslaved people together in networks of mutual support as they practiced cultural forms of resistance.

← Spiritual Practices in the Lowcountry
Women in the Urban Lowcountry →