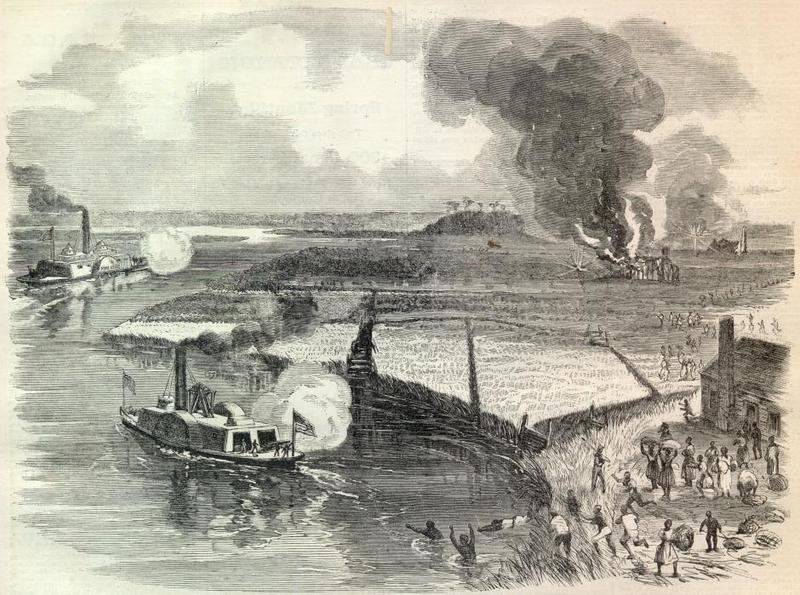 Context
No region of the territory claimed by the southern Confederacy was more dramatically upended by the onset of war than coastal South Carolina. Together the sea islands and the river-crossed coastal lowlands below Charleston were home to some of the most profitable plantations in the South. Over generations the massive slave workforce laboring in its rice swamps and cotton fields had planted and harvested the wealth upon which leading families in the region had risen to prominence, and the lowcountry planter aristocracy was as fervently committed to defending slavery as any of its counterparts elsewhere in the South. They were stunned, then, when Union forces took Port Royal in November 1861 and began a long and uneven process of extending federal military authority over the coast.

If lowcountry planters were bewildered, their slaves were jubilant. Those who had spent their lives laboring under the control of whites asserted their freedom, in some places dividing out the plantations from which their owners had fled and laying the basis for new lives free of the deprivations and indignities that slavery had forced upon them. When, late in the summer of 1862, federal authorities began organizing black regiments among the former slaves, many responded enthusiastically—enrolling in the military and proving their valor in skirmishes and battles with their former masters.

The following letter was written by Brigadier General Rufus B. Saxton, a consistent and outspoken proponent of black enlistment. For a period after the war Saxton was the commander of the Department of the South and—until he was forced out by President Andrew Johnson—the leading Freedmen's Bureau official in South Carolina. The letter accompanied a report on one of the first military engagements of former slaves, under the command of Colonel Thomas Wentworth Higginson, who like Saxton, was a white, northern-born abolitionist.

Sir,
I have the honor to enclose for your information the report of Col. T. W. Higginson, 1st South Carolina Volunteers, of an expedition made by a portion of his regiment under his command up the St. Mary's rivera

It gives me pleasure to report that the expedition accomplished every object I had in view in sending it and was a complete success. Great credit is due to Col. Higginson for his bravery and skill in penetrating so far into the interior of a country filled with a wary and active foe, with so small a force. It foreshadows clearly the very important advantages which might result to our cause by the extensive arming of the blacks. I have labored and am still laboring diligently toward this end in this Department but the limited extent of our lines renders it impossible for the blacks to get to me in any very great numbers. The establishment of posts on the main-land would enable them to do so. None know better than the traitors, now in arms against our government the great element of strength if we would but use it, which the cause of liberty and the Union has in the hearts and muscles of these loyal blacks.

In my humble opinion it would be no misapplication of the best energies of the government should they now be directed towards the arming and disciplining [of] every one that can be brought within our lines.

aSt. Mary's River forms the border between Georgia and Florida north of Jacksonville. Higginson's objective was to destroy a Confederate encampment fifteen miles upriver. Reports of the successful expedition appeared in the national press.