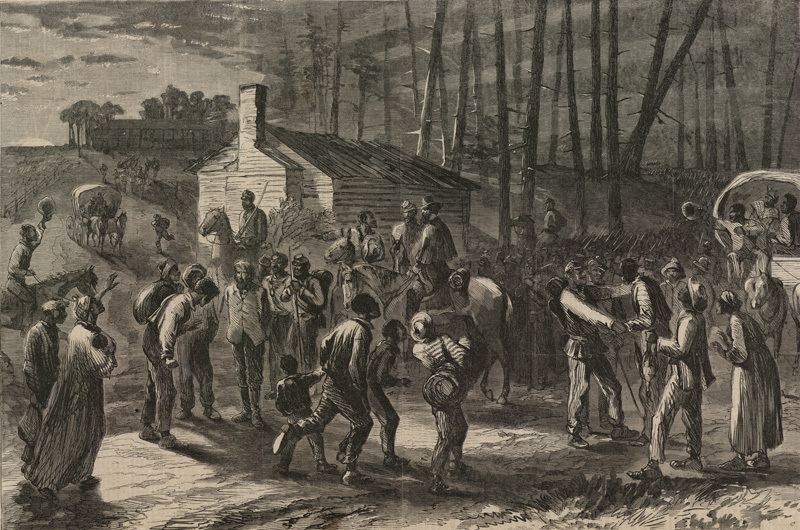 Context
Substantial black enlistment and the organization of General Wild's African Brigade greatly enhanced the ability of Union forces to move out from their strongholds in New Bern and elsewhere along the seaboard and conduct operations deep in the North Carolina interior. Equally as important, perhaps, was the effect these had in bolstering the slaves' impression of the Union military as an army of liberation. The author of the document that follows, a black Pennsylvanian prominent in antislavery agitation, lent his support to Wild in organizing black regiments in the spring and summer of 1863. Here he recounts one of the black troops' early forays into the state's interior in July of 1863.

. . . I am happy to say that I, with the invading expedition in the enemy's country, safely returned to Newbern. Indeed, we were exceedingly successful in marching ninety miles over the rebel country... We expected to have to fight our way through, but the rebels flew away from our advancing forces as the darkness flies from the rays of light. We made rapid charges, but only caught their pickets. Our destination was Warsaw,a and there we tore up and twisted the railroad track so that it can never be used again. But I am somewhat before our march. When we arrived at the town of Duplin,b we were informed that there were upwards of thirty colored prisoners in the Duplin Court House prison that were to be tried for their lives for attempting to escape inside the lines of the US forces. We tried to break down the door with axes. We worked for about an hour. This door seemed to be about as hard as that of any iron safe. Finally the key was sent for, threatening the sheriff with vengeance in case of refusal, in the form of a can of tar and feathers. At the arrival of the key the prison doors were opened and another iron cell opened, and Paul and Silas came walking out.

The thirty was a fabulous number, which had diminished to three live colored men; their lives were saved. Two of them came on to Newbern to join Wild's Brigade. With more vigorous determination, we burnt the sabre factory and railroad to meet the enemy should they come in iron horse. Whilst the Union forces were tearing up the railway, storehouses were sacked and burned, and also the depot, and slaves came running from every side of the road seeking our protection by coming into our lines...

aWarsaw lies about 65 miles due west of New Bern, and slightly more than halfway between New Bern and Fayetteville.

bHere Williams is probably referring to the county seat for Duplin County, officially referred to from about 1820 onwards as Kenansville-about eight miles east of Warsaw.