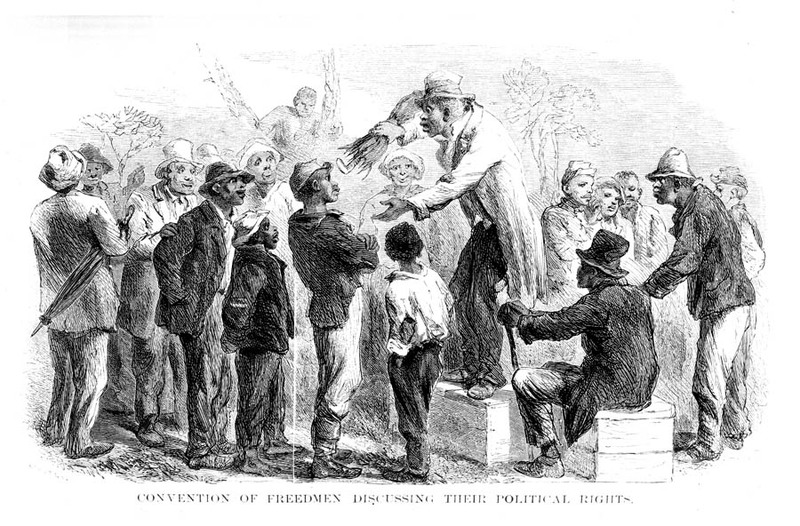 From Macon, Georgia under date of July 8th [1867] the Reverend H. M. Turner, a colored speaker and organizer writes as follows:

This will inform you that our Union Republican Convention is over and our platform framed and adopted. It is not as replete with good sense and prudent feeling as I desired but they overruled me in the committee room and I submitted to the majority."

After the convention adjourned, I ordered all the colored delegates to remain until the next day, which they did, with a few exceptions, and met in the Methodist Church. Some 40 counties were represented in this assemblage (Turner's Convention as they called it) and I spent five hours in instructing them concerning their duties assisted by Costina and Campbell (colored) and Mr. Timony (white.) We read over the dialogues to the delegates and commented on them at great length, so that no mistake might be entertained. While we were reading the dialogue, I acted as the Freedman and Mr. Campbell as the true Republican, I asking and he answering in a suitable voice, giving emphasis to the facts being related. You ought to have seen the effect which it produced. When Campbell would read some of those pointed replies, the whole house would ring with shouts, and shake with the spasmotic motions and peculiar gestures of the audience."

The rule which we adopted it is to have them read in our country churches, societies, leagues, clubs, balls, picknics and all other gatherings, allowing one man to sit back and the audience and read the questions and the other to stand up in the pulpit or some conspicuous part of the house and read the answers. This, I find is much better than merely letting one man read them. The two voices and the interrogatory manner which can be assumed has double the effect upon the uneducated masses.

I have ordered them read in our meetings until our people know them by heart and can relate them from memory."

The dialogues are sought for with eagerness everywhere. I went twenty miles in the country yesterday and while going along the road, I saw a crowd of 25 or 30 persons sitting under a tree. When I came up I found them reading the dialogue"

"The rebels are doing all they can to mislead the colored people in the rural districts by telling them all kinds of falsehoods.

← 1. A Wartime Encounter Between Two South Carolina Slaves
3. An Unnamed Black Organizer Reports on the Reception for Republican Speakers among Freedpeople in South Carolina →