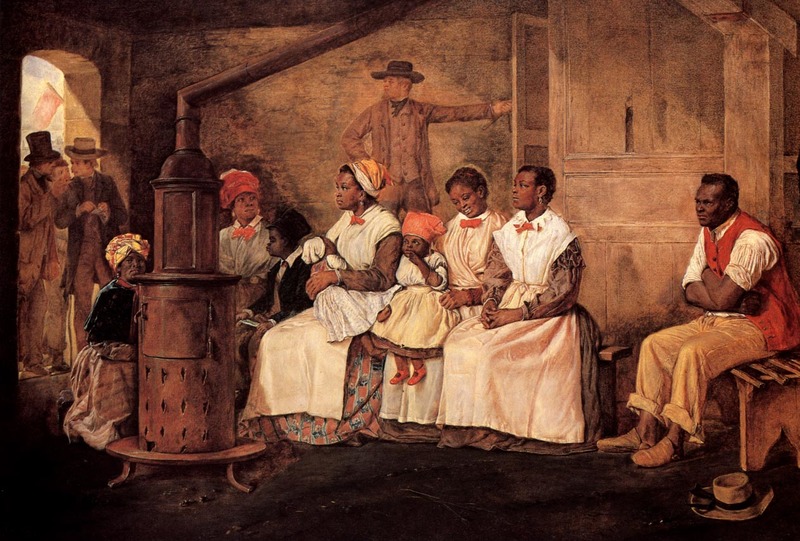 Slaves Waiting for Sale, Eyre Crowe, Richmond, Virginia, 1861, courtesy of Encyclopedia Virginia. Enslaved mothers lived with the constant knowledge that their child could be taken from them at any time.

Slaveholders, both men and women, regularly made the decision to separate enslaved women from their beloved family members in various ways, and therefore enslaved people worried greatly about being forcibly parted from their loved ones and sold to an enslaver who would treat them more badly than their current one. For many enslaved people, permanent or temporary separation constituted one of the harshest forms of slaveholder exploitation and manifestation of their power. Enslaved people were powerless to prevent these separations, whether they were parted from their loved ones in their enslaver’s pursuit of profit or as a form of "punishment" for a whole possible range of alleged misdemeanors. 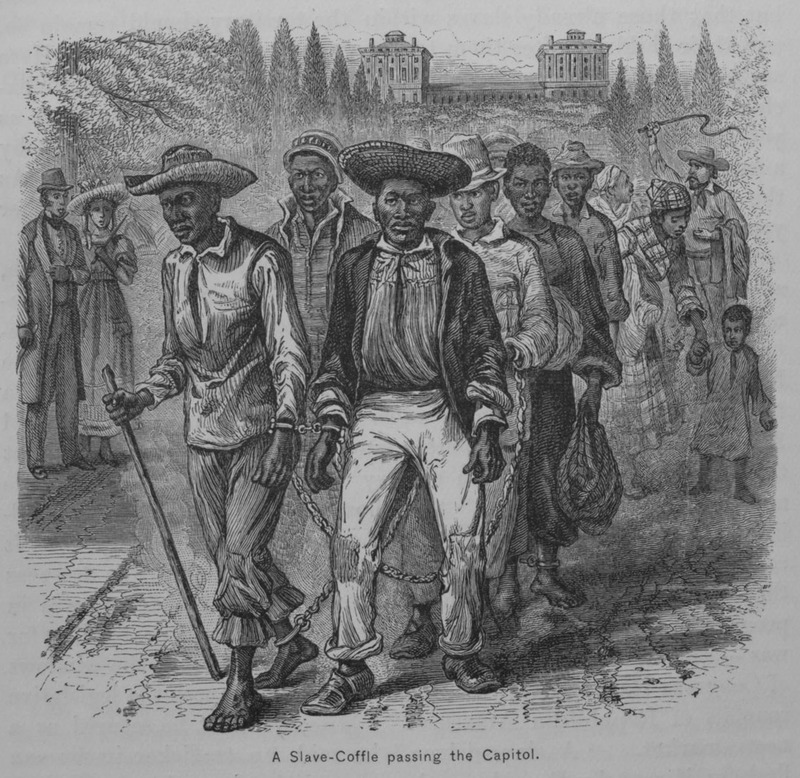 Enslaved people coffled on a forced march, illustration from A Popular History of the United States, circa 1876, courtesy of the Library of Congress.

The most feared form of separation was long-distance sale as part of the broader southward and westward spread of slavery. After the United Stated banned the importation of slaves in 1808, the domestic slave trade—sometimes referred to as the Second Middle Passage—moved one million enslaved people, including many enslaved women, from the upper South to the lower South and West. As the United States purchased more land and investors saw the cotton industry’s high potential for profits after the cotton gin was patented in 1793, the domestic slave trade began to flourish. For whites, cotton symbolized the potential for wealth. For enslaved people, though, it symbolized arduous labor and the potential for heartbreaking family separation. William Grose, enslaved in Virginia, recalls his last moments with his wife before being sold away:

“How I felt that day I cannot tell. I had never been more than twenty miles from home, and now I was taken away from my mother and wife and children. About four miles from the mill, I met my wife in the road coming to bring me some clean clothes. She met me as I was on horseback, handcuffed. She thought I was on the farm and was surprised to see me. They let me get down to walk and talk with her until we came to the jail: then they put me in and kept her outside. She had then eight miles to go on foot, to get clothes ready for me to take along. I was so crazy I don't know what my wife said. I was beside myself to think of going south. I was as afraid of traders as I would be of a bear. This was Tuesday.”

William Grose’s written account from the 1850s after escaping slavery and making his way to Canada, documented in A North-Side View of Slavery.
The Refugee: or the Narratives of Fugitive Slaves in Canada. 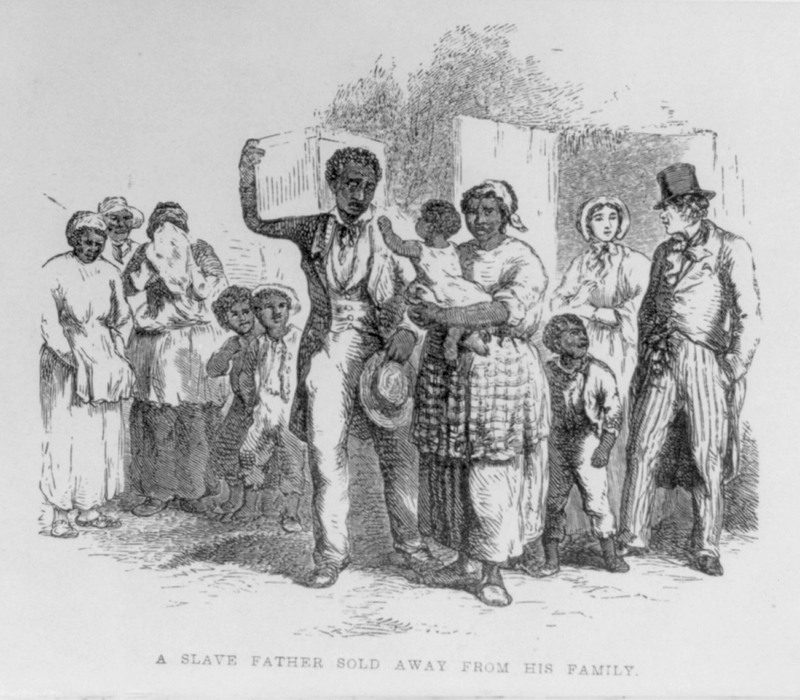 A Slave Father Sold Away from His Family, from The Child's Anti-Slavery Book, 1861, courtesy of the Library of Congress.

As the US grew so did the scale of the slave regime, and the trade in the Lowcountry displayed complex patterns. In the early nineteenth century slaveholders imported many enslaved people to the Carolinas from the Chesapeake region. Thereafter they commonly brought their slaves from the major Chesapeake cities to Lowcountry ports such as Charleston from where these people feared being sold westwards to Louisiana and Mississippi. While high mortality rates meant Lowcountry slaveholders sold few slaves away to the Southwest, the cotton-growing plantations of newer, westward territories and states had a reputation for even more brutality and arduous work than those back East, so enslaved people regarded being ‘sold down the river’ with a huge amount of dread. Sometimes shackled in chain-gangs and sexually assaulted by traders, women away sold as part of the domestic slave trade had little hope of ever seeing beloved family members again.  In contrast, slaveholder migration meant that whole communities of enslaved people partook in the westward trek. Hence familial separations were less severe in the case of enslaver migration, although not for women whose families crossed plantations. Historians estimate the long-distance domestic trade broke up one in three enslaved marriages and separated one fifth of children from their parents. Because women were frequently sold as "fetishized commodities" to be the sexual slaves of men, their exploitation within the domestic slave trade was both gendered and multifaceted. Enslaved women were exploited and sold as laborers, reproducers, and forced concubines known as "fancy girls."

In addition to the domestic slave trade, slaveholders separated enslaved women and girls from their families under other circumstances as well. Enslaved women could also be separated from their loved ones via local sales, through being gifted away as a present, or upon the division of a slaveholders’ estate after their death. Women and girls were also hired out by enslavers for several months or years. Particularly during quieter times in the agricultural cycle, slaveholders maximized profit-making opportunities by answering white’s newspaper ads for temporary help and hired out enslaved women. Indeed, young enslaved girls were at particular risk of being ‘gifted’ by parents or grandparents to young white women and girls of the slaveholding class as their personal waiting maids. 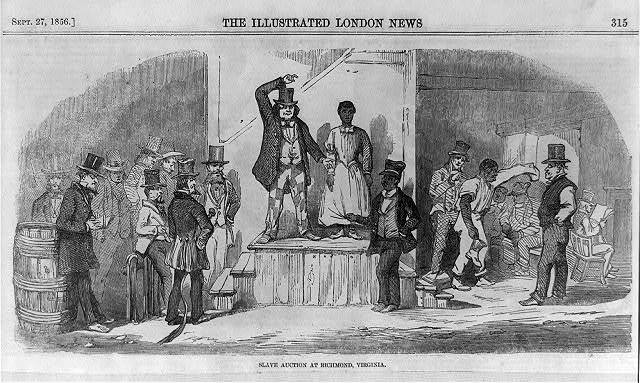 An enslaved woman auctioned for sale, The Illustrated London News, Richmond, Virginia, 1856, courtesy of the Library of Congress.

A pervasive trauma, enslaved people’s fear of family separation is apparent in many accounts, including Sarah Gudger’s: 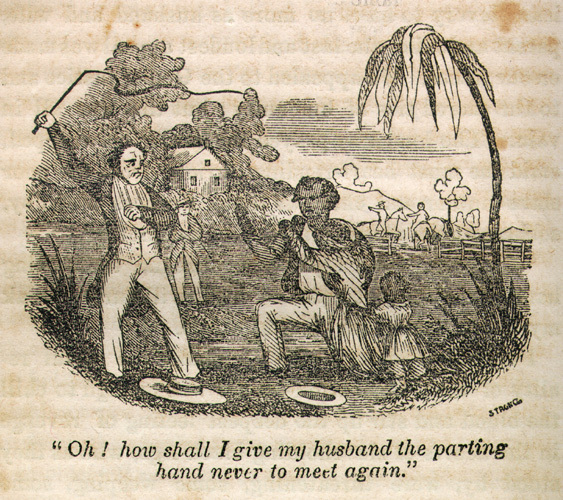 Depiction of an enslaved family's separation, illustration from Narrrative of the Life and Adventures of Henry Bibb, An American Slave, Written by Himself, 1849, courtesy of Documenting the American South.

Enslaved people were regularly forcibly separated from each other by slaveholders in several ways. Sometimes slaveholders integrated sales into their wider systems of punishments. On other occasions they separated people purely in the pursuit of profit with scant regard for their slaves’ familial and community-based relationships. While "prime" men commanded the highest prices for the labor they could perform, enslaved women uniquely held value as potential reproducers in addition to their value as workers, and enslavers bought and sold some women in forms of "sexual slavery" purely for the sexual gratification they intended to receive from them. Regardless of the enslavers’ reason, Gudger and Grose clarify that for enslaved women, men, and children, the day they were separated from their family was one of the most painful and terrifying days of their lives.