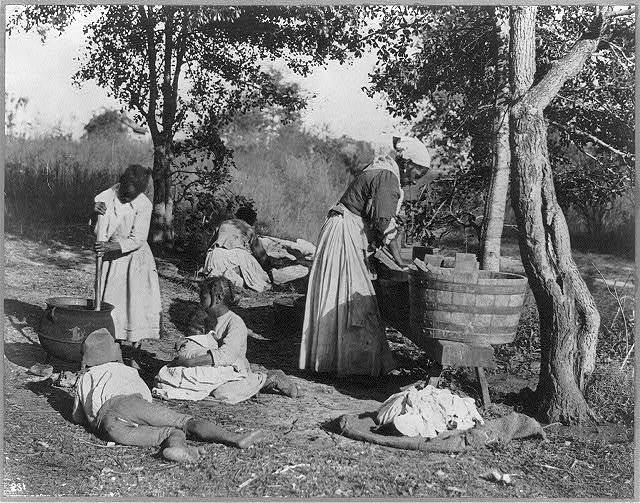 Photograph of a group of women and children doing laundry with a scrub board and tub, circa 1900, courtesy of the Library of Congress.

Once they had completed their task for slaveholders, whether field or domestic work, enslaved women in the Lowcountry continued to perform different work in their own homes and for their own families, sometimes long into the night. Nineteenth-century gender conventions dictated that women should complete the majority of domestic work, so women in enslaved communities were expected to clean their cabins, cook for their families, wash and mend clothes, and care for children.

The work women accomplished for their families also kept them close to the slave quarters. Enslaved men’s gendered chores, for example hunting and fishing, more routinely took them away from their plantations and farms than did women’s tasks. Such activities enabled men to live in a wider world than women, where they were more familiar with their geographic locales and came into contact with a greater variety of people within their local communities. Conversely, women remained more tied to their homes and the immediate surrounding area. In his WPA interview, John N. Davenport described the differences between the work women and men completed:

"Sometimes de fellows would slip off and hunt or fish a little on Sunday. Women would do washing on Saturday nights or other nights." 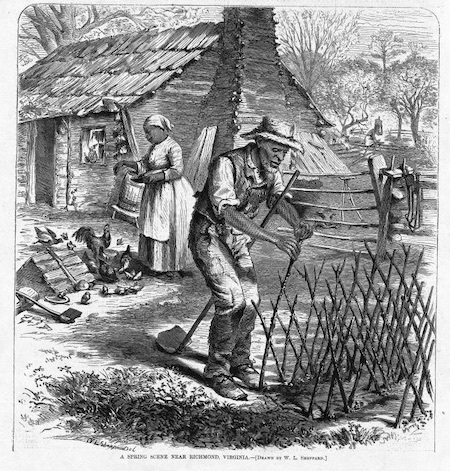 Women also completed labor with their families, such as basket making and gardening. All family members, including men, women, and children, worked together in tending their small gardens or patches of land. Enslaved people in the Lowcountry commonly grew food to supplement their diet under the task system. Some enslaved people then also sold or bartered these goods in local markets or towns. However, their gardens remained secondary to any work the slaveholder demanded. Genia Woodberry, enslaved in Marion County, South Carolina, explained her family’s experience:

As well as performing the bulk of domestic chores for their families, enslavers also more commonly assigned women additional gendered labor to perform, some of which had to be undertaken late into the night while children and husbands slept. Female slaveholder Margaret Anne (Meta) Morris, in a typical diary entry,  described how, after work, she

"gave each of the women servants a yard of long cloth to make an apron." 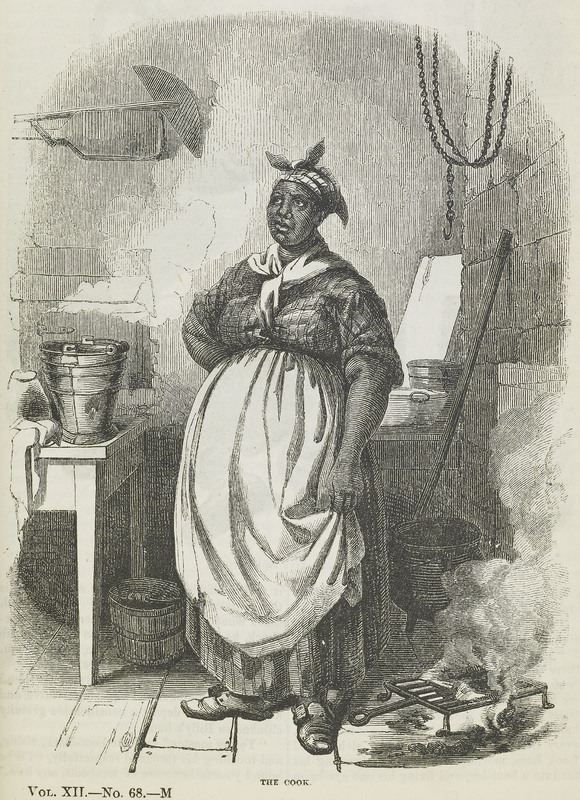 Illustration of an enslaved cook, David Hunter Strother, Virginia, 1856, courtesy of the Library of Congress.

Some enslaved women living on large plantations worked in their enslavers’ kitchens or dairies. These were often located some distance away from the plantation house itself--dairies needed to be cool and shady, while kitchens often had a fire lit most of the time which risked setting off a wider blaze. Depending on the location of the labor buildings, such work could be more isolating than for those laboring in the fields. Often the plantation cook had her own separate living quarters above the kitchen where she lived in order to maintain the fire at all times. Dairy women prepared milk and cheese, and churned butter. They also collected buttermilk and clabber (curdled milk) in order to feed young enslaved children. Enslaved women who worked in plantation kitchens provided meals for white slaveholding families and sometimes also a midday meal for enslaved field laborers as well (an evening meal was usually eaten within people’s own cabins). Women additionally had to provide food for infants and young children, who were usually cared for in the plantation yard by elderly women. Preparing this food required a lot of skill and resourcefulness, though white enslavers appropriated much culinary knowledge that women brought to Southern tables, for example that which utilized knowledge of African vegetables, herbs, seasonings, and cooking methods. Among Gullah women these traditions survive to the present day, and form an important and distinctive regional cuisine. Jessie Sparrow’s mother worked as a plantation cook and she remembered how her mother would take food from the kitchen to feed her family:

"Children allowed to stay in the big house, but mostly stayed in the yard….Children fed from the table in the missus kitchen. ‘en some uv de time my mammy ‘ud bring us sumtin to eat, wha’ wus cook in de missus kitchen, en le’ us eat it in she room.
White folks had a lot of cows, so children given milk and clabber every day. Plus given meat, hoecakes, oven bread.
Everything was cooked on a fireplace.  Rods were placed across the fireplace in the kitchen and everything was cooked on it. ‘Dat whey dey cook us ration’. Dinner mostly peas, collards, meat, then corn bread and clabber in the evening. Plus poke salad with meat.
Caught wild animals including possum, rabbit, squirrel. Plus caught fish from the point next to the white folks house." 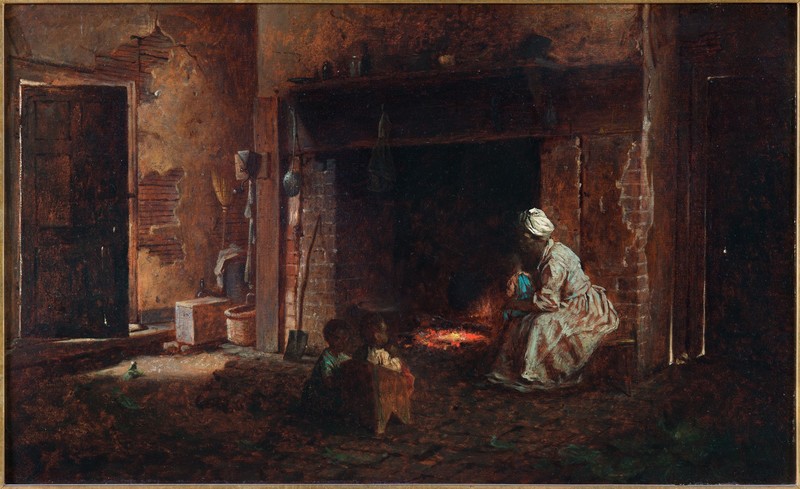 Likewise, Charlie Davis recalled being given extra food because his mother was a cook. His family lived in a one room house in the yard and ate in the plantation kitchen every day:

"Dey give my mammy and she chillun just such things as de white folks had to eat like biscuit en cake en ham en coffee en hominy en butter en all dat kind of eatin’. Didn’ have no need to worry bout nothing tall. Massa had a heap of other colored people besides we, but dey never live day way….They live in their own houses and and didn’t get milk or ham, just got ‘old clabber.'"

Women also had to make candles and soap as well as other plantation goods, spin thread, weave cloth, make and repair clothes (whether for everyday use or for "smarter" Sunday wear), and make bedding and quilts for their immediate family members, and sometimes for plantations as a whole. Although subjected to lengthy hours of intricate and complex work in sometimes very poor light conditions, enslaved women often used this time to converse and build rapport with other women. This gendered camaraderie under adversity created interdependent relationships that enabled women support each other through their everyday challenges.