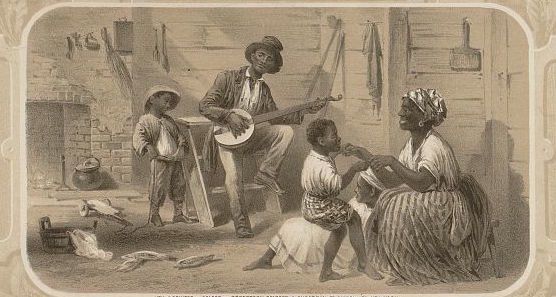 Print portraying an enslaved family in their cabin titled, Oh carry me back to ole Virginny, 1859, courtesy of the Library of Congress.

Motherhood was central to the great majority of enslaved women’s lives. While some women attempted not to become mothers, and a minority were unable to reproduce, most women negotiated childbirth and raising children within the confines of the slave regime, and they took a lot of care in raising their daughters to survive enslavement as females. Despite the fact that bonded women knew their children would be born into enslavement, most became mothers and many found parenthood a source of joy and comfort, as many WPA interviews with formerly enslaved women in the 1930s convey. Likewise, Harriet Jacobs described in her autobiography that her "mother’s love" made her determined to secure a better future for her children by escaping bondage (Harriet Jacobs, Incidents in the Life of a Slave Girl (New York: Dover, 2001 [1861]), 130). Women put their children first and strove to protect them and motherhood gave women the opportunity to express maternal love, to receive the love of a child, to gain a sense of worth, to give and receive comfort, and to nurture; notwithstanding all the agonies of sale, separation, ill-health, physical punishments and death that enslavement brought. Enslaved women tended to give birth to their first child at a relatively young age and have short intervals between births, in part due to a lack of contraception, but also because of the pressures placed upon women by slaveholders who were ever-anxious to keep their slave population increasing without the purchase of new people. Frequent childbirth and over-work had a detrimental impact on enslaved women’s health, as well as maternal and infant mortality. 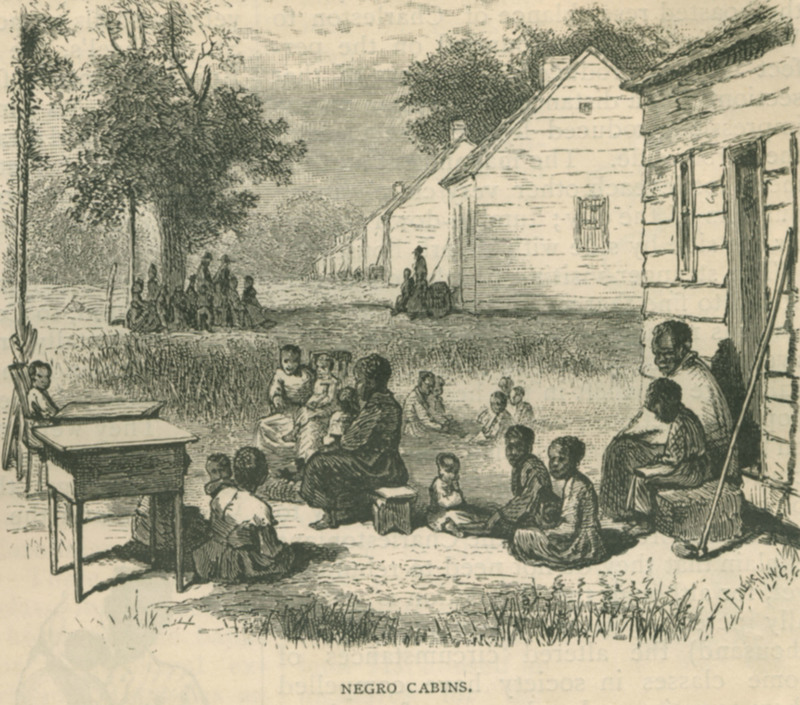 Most women received just one month off work when postpartum, and they were also regularly required to continue daily field or house labor until very close to giving birth itself. The physical and emotional stress of childbearing under slavery necessitated many women to also cope with the death of their infants. So common were infant deaths in the Lowcountry that the Gullah language produce two words to describe a firstborn child: fus one (first one) and Comesee (first born child that lived). At the same time, slaveholder in the Lowcountry did regularly lower the daily required task labor of pregnant women as they realized that lower morality rates among women and children led to greater profits for them. This did not completely offset, though, how susceptible pregnant women and their young children were to environmental and medical factors that led to death on Antebellum plantations. White doctors only rarely attended the births of enslaved women, but enslaved midwives, known as "grannies" and white slaveholding women often assisted confined women. White slaveholding women were involved to whatever degree they decided upon, without regard for enslaved women’s desire as to who they wanted to help assist them in birth. Many women gave birth to mixed-race or what used to be called "mulatto" children following sexual assaults at the hands of white men, and while white women sometimes regarded these children with hostility, they were both loved and accepted within enslaved communities themselves.

Women remained at the heart of mother-centered (or matrifocal) enslaved families. They strove to raise their children as well as they could, for example by advising their daughters on the perils of enslavement for women who faced physical violence by slaveholders of various kinds, ill-health, and sale and separation. Slaveowners more commonly sold men alone, and mothers and infants together, although they often separated older children from their parents. They also abused enslaved mothers’ ability to lactate by forcing them to wetnurse white infants, or those of other enslaved women who were needed to labor elsewhere. 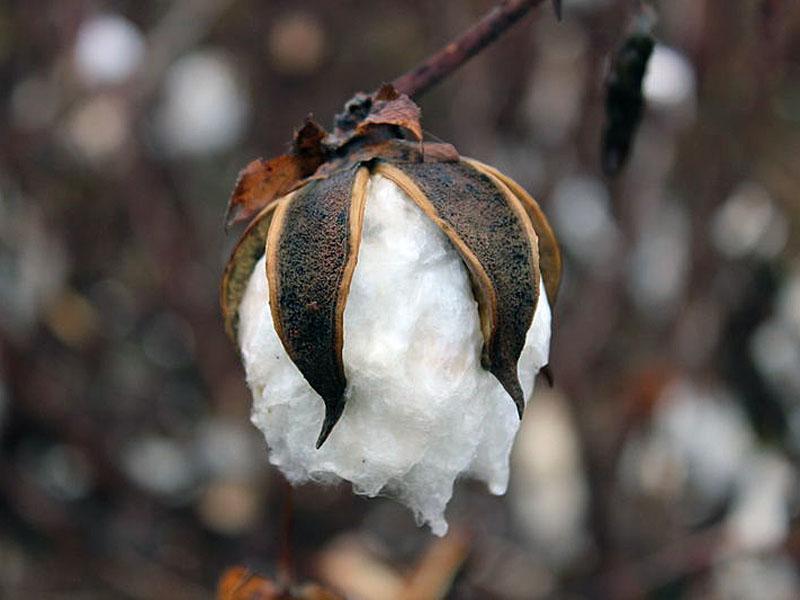 Mothers passed on their multiple skills to their daughters through the generations, including those associated with cooking and herbal medicines. While some women used these skills in an attempt to avoid motherhood, for example by chewing cotton roots in the belief they held contraceptive properties, or by trying to induce abortions, others lamented the fact that they could not bear children of their own. But despite the pleasures that motherhood could bring, children also tied women to plantations and farms. The great majority of runaways were men and most women appear to have felt that attempting to escape with their children was simply too risky. Those who fled to the North in the US without their children, including the North Carolinian slave, Harriet Jacobs, were in a minority. Circumstances where they left a plantation with their children are rare, though one record exists in a Lowcountry plantation journal. Some women instead found cities a place of refuge, including Charleston. Between 1820 and 1865 Charleston newspapers listed 517 runaway slave advertisements with women as the runaways. Historian Amani T. Marshall notes that 24 percent of those women were assumed by their enslavers to have been seeking refuge in the city itself. Temporarily leaving the plantation, sometimes noted by slaveholders in their plantation journals as “truanting,” was seen by some women as an option to obtain at least temporary relief from the stress and violence of plantation life. 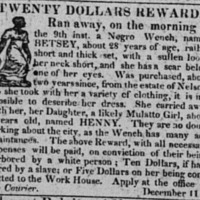 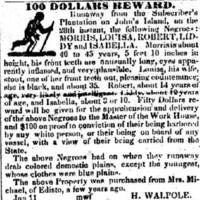 Runaway advertisement for Morris and his family, Charleston Mercury, January 11, 1836. 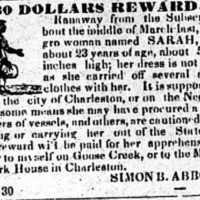 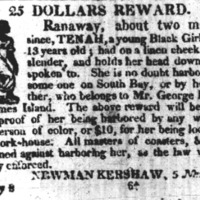 Women’s reproductive labor, like their work for slaveholders, effectively tied them to their immediate environments to a greater extent than for men. Moreover, running away would also take women away from their mutually supportive, matrifocal networks, leaving them vulnerable and isolated. Ryer Emmanuel gave her WPA interviewer gave a child’s perspective on the multiple roles of mothers and childcare under enslavement:

"Always when a woman would get in de house [to have a baby], old Massa would let her leave off work wen stay dere to de house a month till she get mended in de body way. Den she would have to carry de child to de big house en get back in de field to work. Oh, dey had a old woman in de yard to de house to stay dere en mind all de plantation chillun till night come, while dey parents was workin. Dey would let de chillun go home wid dey mammy to spend de night en den she would have to march dem right back to de yard de next morning. We didn’ do nothin’, but play ‘bout de yard dere en eat what de woman feed us. Yes’um, dey would carry us dere when de women would be gwine to work. Be dere fore sunrise. Would give us three meals a day cause de old women always five us supper fore us mammy come out de fields dat evenin." 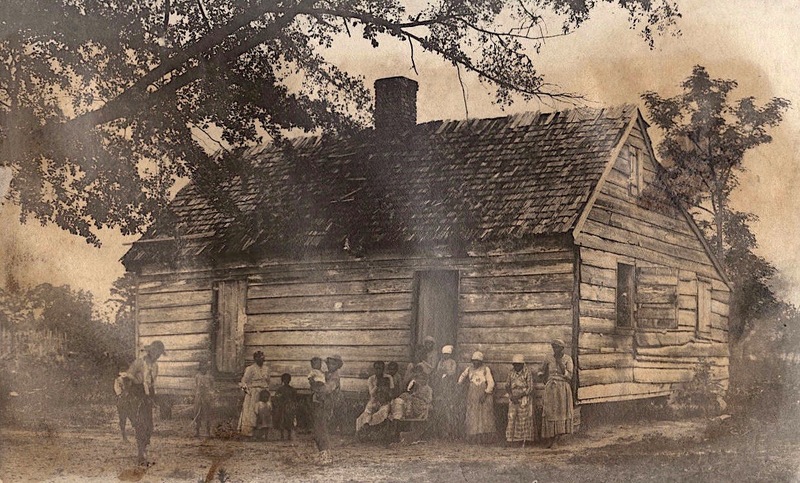 ← Courtship and Marriage
Enslaved Women’s Bonds Among Each Other →