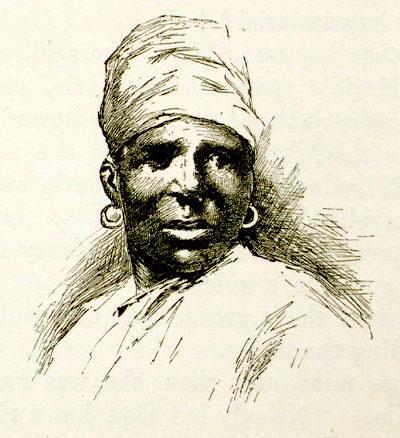 Illustration of an enslaved woman, E.W. Kemble, from Uncle Tom's Cabin, Harriet Beecher Stowe, 1891, courtesy of The Institute for Advanced Technology in the Humanities.

Under bondage, women faced multiple forms of sexual abuse from slaveholders, and the rape of enslaved women was not a crime in any slaveholding state. Sometimes this involved physical violence, while at other times men used different methods to cajole women into sexual relationships, including the promise of material benefits or threatening sale if women failed to consent. Sexual exploitation of enslaved women can be situated on a spectrum of experiences that overlapped or changed for each woman who experienced it, ranging from violent penetrative rape to other forms of sexual harassment to formalized concubinage. Just as men’s sexual harassment varied so did enslaved women’s responses to it.

Physical punishment was sometimes extremely violent and could result from women’s refusal of slaveholders’ sexual advances. Minnie Fulkes alluded to this violence when interviewed by the WPA. She suggested an overseer tied up and whipped her mother because she refused to be “a wife” to this man. Fulkes hence rather opaquely conveys how her mother’s refusal of the overseer’s sexual advances led to this punishment: 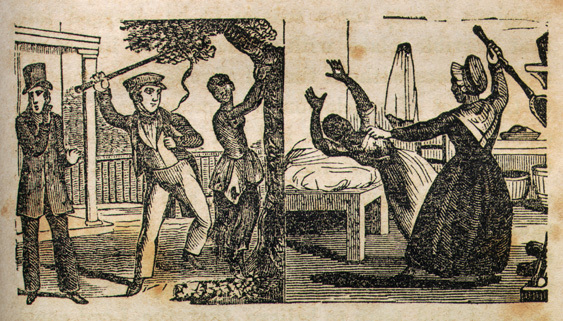 Illustration of both male and female enslavers beating an enslaved African American woman, from Narrative of the Life and Adventures of Henry Bibb, An American Slave, Written by Himself, 1849, courtesy of Documenting the  American South.

"Honey, I don’t like to talk ‘bout dem times, ‘cause my mother did suffer misery. You know der was an overseer who use to tie mother up ion de barn with a rope aroun’ her arms up over her head, while she stood on a block. Soon as dey got her tied, dis block was moved an’ her feet dangled, yo’ know, couldn’t tech de flo’. Dis ol man, now, would start beatin’ her nekkid ‘til de blood run down her back to her heels. I took an’ seed th’ whelps an’ scars fer my own self wid dese two eyes. Was a whip like dey use to use on horses, it was a piece of leather ‘bout as wide as my han’ from little finger to thumb….I asked mother ‘what she done fer ‘em to beat and do her so?’ She said, 'nothin. Tother than she refused to be wife to dis man."

Many women were unable to escape enslavers’ sexual assault, particularly without being beaten as a result. Women who labored in plantation homes were at particular risk of sexual predators because they worked in close proximity to white men. A sexual assault victim as she entered just her fifteenth year, Harriet Jacobs described her disgust for her enslaver and mentioned her attempts to turn to her mistress—fictionalized as Mrs. Flint, but whose real name was Mary Norcom—for support. Instead, her jealous mistress responded with hostility and anger. Norcom’s response was typical of white women who regarded the real victims of sexual violence as Jezebels, the invented hypersexualized persona whites ascribed to enslaved women. Jacobs penned her experience as a fifteen-year-old girl with her slaveholders: 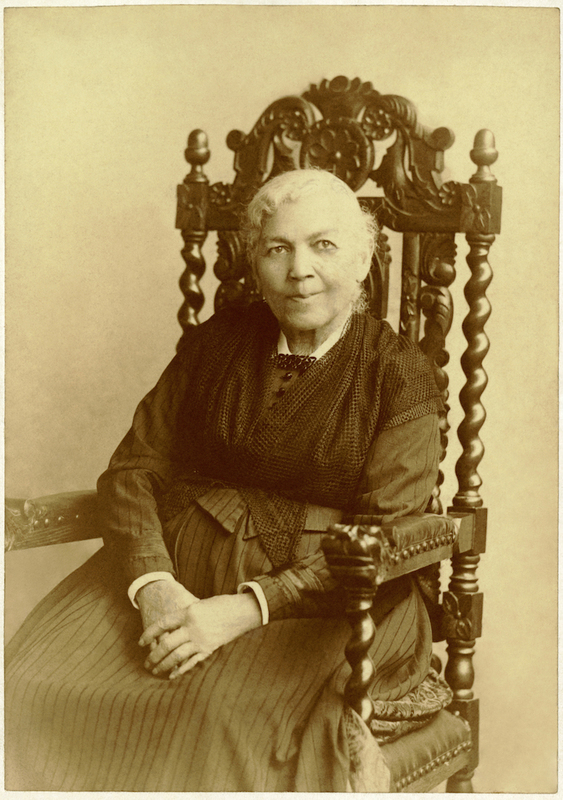 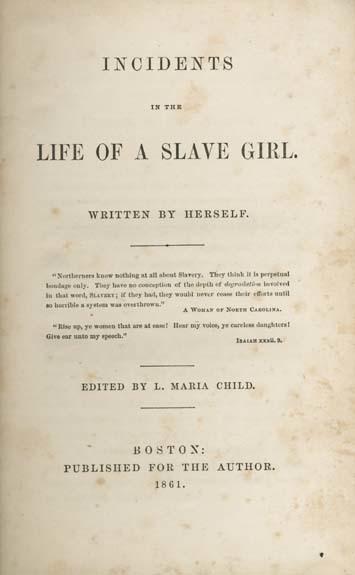 (Top) Portrait of Harriet Jacobs, photograph by C.M. Gilbert, Washington, D.C., 1894, courtesy of Wikimedia Commons. (Bottom) Cover page of Incidents in the Life of a Slave Girl, Harriet A. Jacobs, 1861, courtesy of Documenting the American South.

"He was a crafty man, and resorted to many ways to accomplish his purposes. Sometimes he had stormy, terrific ways that made his victims tremble; sometimes he assumed a gentleness that he thought must surely subdue. Of the two, I preferred his stormy moods, although they left me trembling. He tried his utmost to corrupt the pure principles my grandmother had instilled. He peopled my young mind with unclean images, such as only a vile monster could think of. I turned from him with disgust and hatred. But he was my master. I was compelled to live under the same roof with him – where I saw a man forty years my senior daily violating the most sacred commandments of nature. He told me I was his property; that I must be subject to his will in all things. My soul revolted against the mean tyranny. But where could I turn for protection? No matter whether the slave girl be as black as ebony or as fair as her mistress. In either case, there is no shadow of law to protect her from insult, from violence, or even from death; all these are inflicted by fiends who bear the shape of men. The mistress, who ought to protect the helpless victim, has no other feelings towards her but those of jealousy and rage…"

The diary of Keziah Brevard, a white woman writing during the Civil War, illustrates the contradictory and racist ideas white society held about Black women. They demanded Black women submit themselves to sexual violence for the pleasure of male enslavers and to bear children as future laborers while also degrading Black women by defining them as immoral for the very actions whites demanded of them:

"They are not prepared for freedom, many of them set no higher value on themselves than the beasts of the field do. I know a family in five miles of me where there are six women who have and have had children for thirty years back and not one of them but [have] been bastards and only one ever had a husband… I own many slaves and many of the females are of the lowest cast – making miserable their own fellow servants by meddling with the husbands of others  -- I am not excusing the males, but in the world they are not so degraded by such conduct as the females."

Enslaved women’s responses to the sexual advances of white men varied. Some fought back, regardless of the consequences of their actions. Others acquiesced in an attempt at self-preservation. Overall the sheer volume of surviving testimony about such a private, personal, and stressful phenomenon—alongside the fact that so many enslaved women gave birth to the children of their masters—is testament to the fact that such abuse by white men in a variety of positions was widespread. Enslaved in South Carolina, WPA respondent Gus Feaster recalled the plantation overseer, Wash Evans, as a "wicked man" who "take ‘vantage of all de slaves:

"One day Missus sent my mammy and de other ole lady Lucy to fetch her some blackberries by dinner. Me and John was wid dem a pickin’ and fillin’ o’ de big buckets from de lil’ buckets when ole man Evans come riding up. He argued wid both mammy and ole lady Lucy and dey keep telling him dat de missus want her berried and dat dey was ‘ligious wimmens anyhow and didn’t practice no life o’ sin and vile wickedness. Finally he got down off’n his hoss and pull out his whip and low if dey didn’t submit to him dem he gwine to beat dem half to death… Finally dey act like dey gwine in de wickedness wid dat ole man. But when he tuck off his whip and some other garments, my mammy and ole lady Lucy grab him by his goatee and further down and hist him over in de middle of dem blackberry bushes. Wid dat dey call me and John. Us grab all de buckets and us all put out fer de big house fas’ as out legs could carry us." 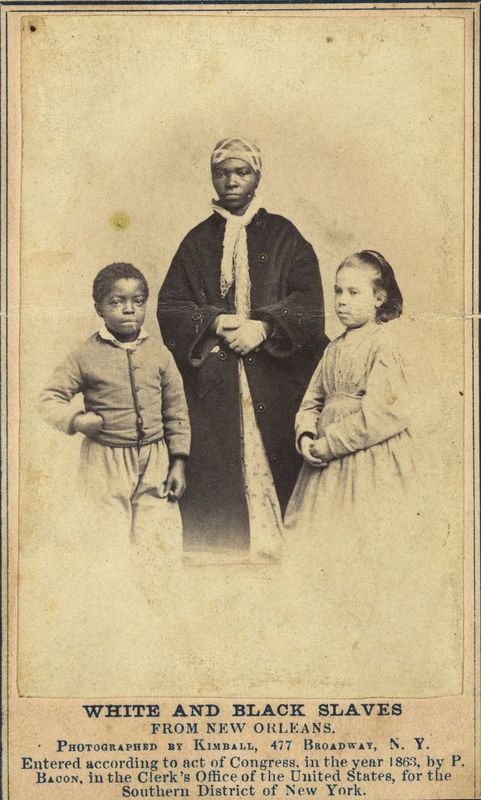 For women unable to escape sexual advances and violence of white men, the results could be very difficult for mothers and children. Ryer Emmanuel recalls the plantation mistress’ reaction to one of the enslaved children born with “yellow skin” and “straight hair.”

“All de other chillun was black skin wid dis here kinky hair, en she was yellow skin wid right straight hair. My Lord, old Missus been mighty proud of her black chillum, but she also sho been touches bout dat yellow one. I remember, all us chillum was playin round bout de step on day whe’ Miss Ross was settin, en she ax dat yellow child, say, ‘Who your papa?’ De child never known no better, en she tell her right out exactly de one her mammy had tell her was her papa. Lord, Miss Ross, she say, ‘Well, get off my step. Get off en stay off dere cause you don’ noways belong to me.’ De poor child, she cry en she cry so hard till her mammy never know what to do.”

The fate of the little girl is not recorded. Considering the disdain expressed about her by the wife of her enslaver, "Miss Ross," the girl was likely continually subjected to verbal assaults, sold away, learned to stay out of the eyesight of the white family, or a combination of these. In all cases, though, the mother and child were place in an impossible position with the white slaveholding family.

White men and women were complicit slaveholders. Even as white women expressed anger towards enslaved women and their children, they served as “co-masters” by supporting their husbands and gaining economic and social benefits from owning slaves. When white men or women were violent towards enslaved women, they saw it as part of the necessary order of their world. Ignoring enslaved women’s unwillingness to participate in sexual acts, many white men cataloged their assaults as simply part of their paternalistic purview. One slaveholder, suspecting himself of having children with multiple women he enslaved, wholly disregarded the impact his assault had on women when he wrote of his exploits:

"Sally says Henderson is my child. It is possible but I do not believe it… Louisa’s first child may be mine. I think not. Her second I believe is mine… Do not let Louisa or any of my children or possible children by slaves of strangers. Slavery in the family will be the happiest earthly condition."

Sexually exploited women were left assaulted and sometimes pregnant by enslavers or overseers. Their trauma was worsened because they knew that they had little ability to protect themselves from harm in the future. When they did bear enslavers’ children, they had an extremely limited ability to keep their child safe or keep them from being sold away. Their exploitation served the egos and whims of the enslavers or overseers, who most often treated Black women as objects, not humans. The exploitation of their bodies continued with enslavers’ demands that they reproduce to ensure a subsequent generation of forced, bonded labor.