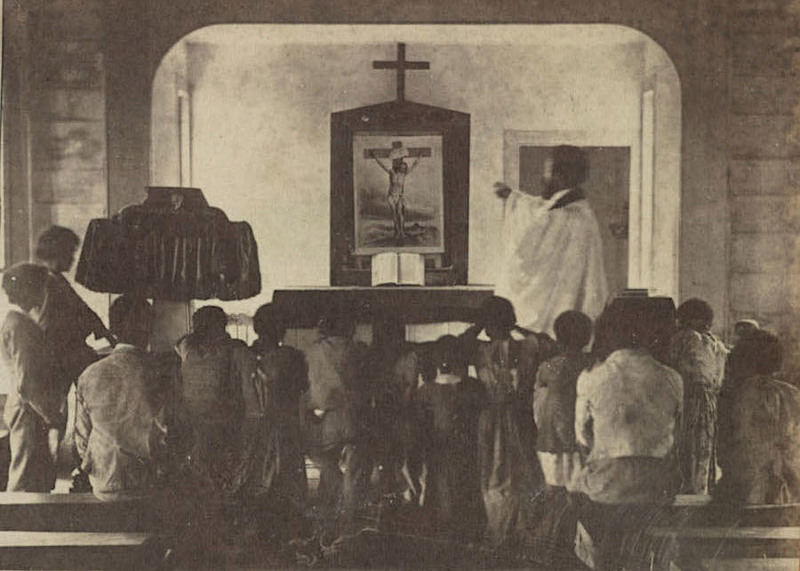 Enslaved people congregated in Zion Chapel, an Episcopal church built for slaves in 1858 on Rockville Plantation, Wadmalaw Island, South Carolina, 1861, courtesy of the Library of Congress.

The most important cultural form for enslaved women in the Lowcountry and across the South was their religion. Enslaved people's religious and spiritual beliefs began with the ones brought from their African homes. Once across the Atlantic, their beliefs melded together among enslaved populations creating regionally specific practices in the US South. By the antebellum era, the vast majority of enslaved people were strongly Christianized. In the Lowcountry, as in other regions of the South such as Catholic Louisiana, Christian beliefs were joined with existing practices among enslaved populations creating unique forms of Christian practice.

Enslaved people’s Christianity tended to follow decentralized Baptist organizational patterns and revolved around church attendance, though practices varied on plantations and within more urban areas. In Lowcountry towns and cities such as Savannah, pockets of Catholicism remained strong. There were also antebellum-era enslaved Muslims living on at least two Georgia sea islands—Sapelo and St. Simons. By far, though, Christianity was the largest spiritual influence on antebellum enslaved people’s belief systems. In cities too, enslaved people and free people of color also worshiped together, which caused concerns for authorities who believed such interactions provided a tinderbox for revolts. 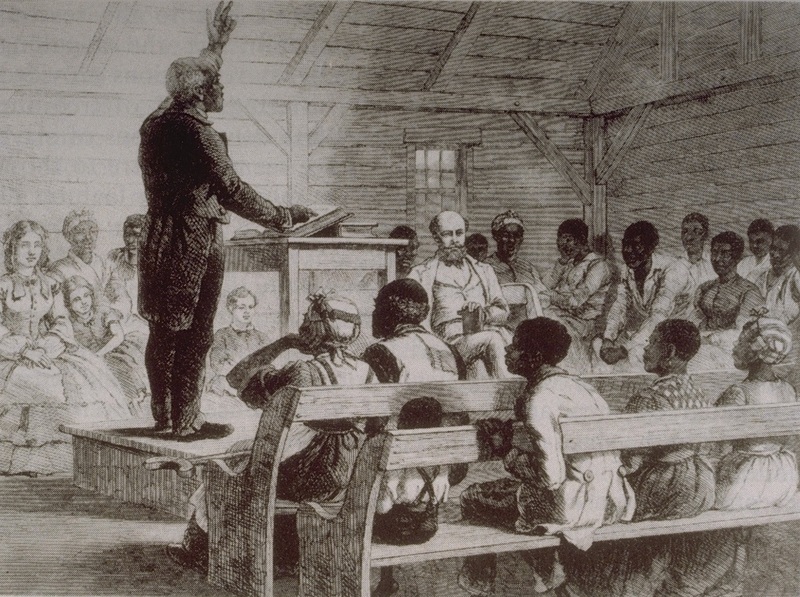 Illustration of an enslaved man preaching to a congregation of enslaved people with the slaveholding family present, from The Illustrated London News, Port Royal, South Carolina, 1863, courtesy of University of Virginia Library Special Collections.

On plantations, enslaved women’s religious practices tended to take two main forms—the visible and the invisible. Slaveholders imposed the former. By the early nineteenth century most Southern slaveholders believed it was their Christian "duty" to instill moral virtue into enslaved people. Anti-literacy laws forbade enslaved people from reading and writing, though some slaveholders (especially white women) taught basic literacy and encouraged Bible reading. However, the vast majority of enslaved people learned about Christian religious beliefs by attending sermons. Some slaveholders took enslaved people to their own churches (where slaves sat at the back or the gallery), others brought in white preachers on Sundays for preaching and instruction, and sometimes slaveholders chose to preach and instruct themselves. These services were largely designed to instill slaveholders’ power and encourage obedience and good behavior. In doing so, Christian religious services reinforced the institution of slavery itself, often hiding aspects of the Bible that complicated slaveholders’ agenda. Because they demanded Black people’s subservience to whites, most slaveholders chose white preachers to instructed enslaved people, lowering the risk of the message veering off course. 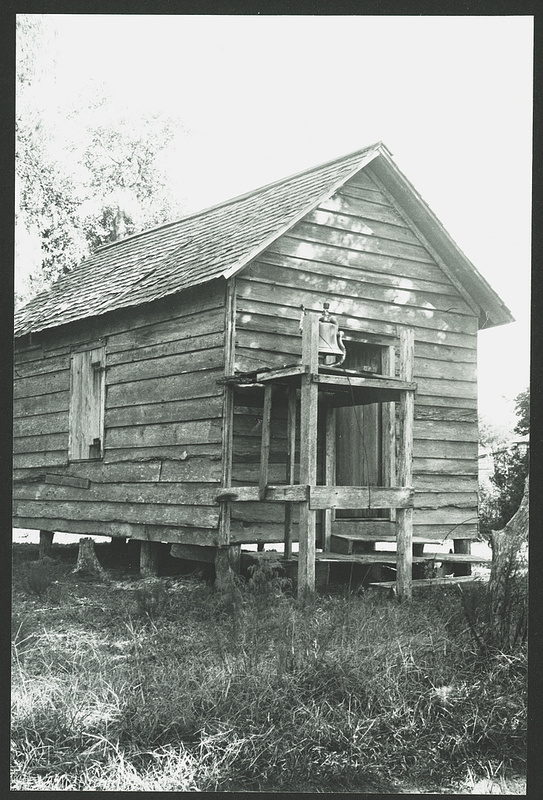 Praise house at Sapelo, photograph by Muriel and Malcolm Bell, Sapelo Georgia, 1939, courtesy of the Library of Congress.

"We had church wid de white preachers and dey tole us to mind our masters and missus and we would be saved; if not, dey said we wouldn’. Dey never tole us nothin’ ’bout Jesus."

"Black preachers couldn’ preach tuh us. . . De white preacher would call us under a tree Sunday evenin tuh preach tuh us. Dis is whut his text would be: 'Mind yo mistress.' Den he would ceed tuh preach — 'Don’t steal der potatoes; don’t lie bout nothin an don’ talk back tuh yo boss; ifn yo does yo’ll be tied tuh a tree an stripped neckid. When dey tell yuh tuh do somethin run an do hit.' Dat’s de kind uv gospel we got."

"She built a nice church with glass windows and a brass cupola for the blacks and a yellow man [light-skinned Black man] preached to us. She had him preach how we was to obey our master and missy if we want to go to Heaven, but when she wasn’t there, he come out with straight preachin’ from the Bible."

“We would sneak off and have prayer meetin’. Sometimes the paddyrollers catch us and beat us good but that didn’t keep up from tryin’.” 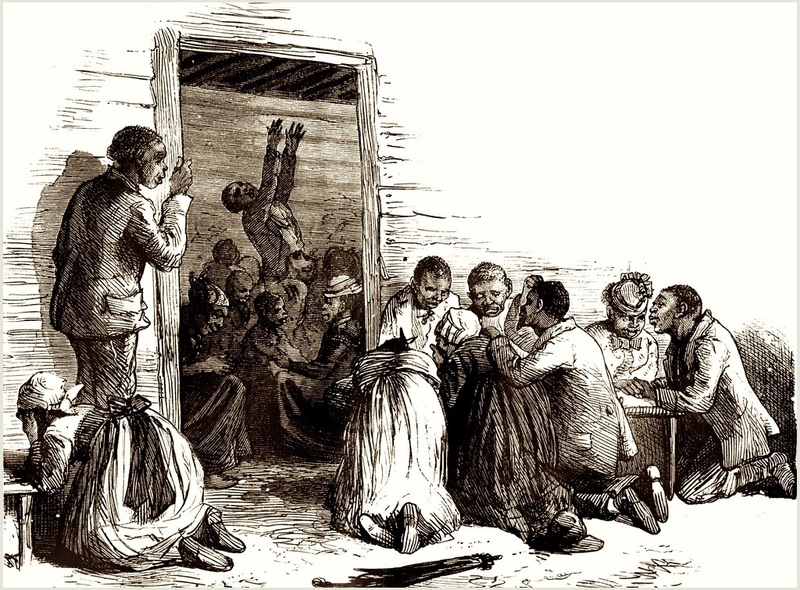 A group of enslaved people attending a religious prayer meeting, from Scribner's Monthly, an Illustrated Magazine for the People, 1874, courtesy of Florida Center for Instructional Technology.

To worship freely, enslaved people had their own, more "invisible institution" where they prayed, sang, performed ring-shouts, and danced. Their religious practices took place away from the eyes of enslavers, sometimes hiding in local woods or meeting secretly in an enslaved person’s home during the night and without a slaveholders' knowledge or permission. Enslaved preachers, who tended to be male rather than female, were highly revered within slave communities, and they preached about topics enslaved people were looking for, such as freedom and perseverance. In Lowcountry areas, women and men found it easier to worship away from slaveholders’ watchful eyes than in most other slaveholding states. With slaveholders regularly away from their plantations, many Lowcountry enslaved people experienced less surveillance by slaveholders but still had to contend with slave patrollers. Enslaved in Georgia, Mary Gladdy recalled how enslaved people used to gather in cabins at night to hold prayer meetings:

"A large iron pot was always placed against the cabins door -- sideways -- to keep the sounds of their voices from ‘escaping’ or being heard from the outside. Then the slaves would sing, pray, and relate experiences all night long."